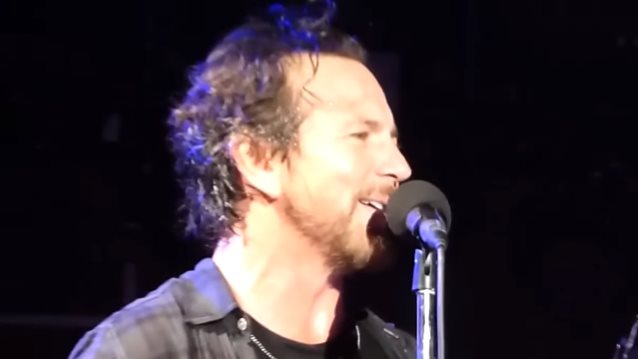 Former PEARL JAM drummer Dave Abbruzzese has clarified his comments about his exclusion from the band's nomination to the Rock And Roll Hall Of Fame. Should the group get in, only original drummer Dave Krusen and current stickman Matt Cameron will be inducted with the other four founding members. Abbruzzese, Jack Irons and Matt Chamberlain, who all did stints behind the kit after Krusen left and before Cameron settled into the role in 1998, will not enter the Hall with the rest of the members.

Abbruzzese wrote on his Facebook page: "I am requesting that the media please refrain from attempting to make a negative story out of this.

"It is a drag that these 'writers' are taking Facebook comments out of context and using them to create a story that doesn't exist.

"I am not slamming the Hall Of Fame or PEARL JAM. I understand that there may be some flaws inherent to the balloting process.

"I reacted emotionally, and my reaction was based on a lack of understanding.

"I have spoken to friends and peers and I am resolved to wait patiently to watch and see how it works out.

"I am not looking to ruffle any feathers. I am not angry with the Rock And Roll Hall Of Fame or PEARL JAM."

Abbruzzese joined the band in 1991 for the "Ten" tour after the departure of Chamberlain, and played on two of the band's biggest and most important albums, 1993's "Vs." and 1994's "Vitalogy". His stint with the group ended that year, after which Irons came on board for a four-year run.

Abbruzzese originally wrote on his Facebook page that PEARL JAM's nomination for the Rock Hall was "just a fine opportunity to see what [the group] has to say in response. Let's see if they do the right thing. It'll be interesting to see the spin that is put on it. That band and its management have never been ones to shy away when an injustice is done. Let's see if they still have the courage to fight the good fight!"

He added, "I've seen them change a 15-year-old settlement agreement just by ignoring its contents and withholding money that didn't belong to them in order to force me to accept the changes. They know how to play the game… their way!... The members of PEARL JAM have got to know what's the right thing to do. They can't justify ignoring my contributions. Like me or not."

The final list of inductees will be announced in December and the induction ceremony will take place in April 2017 at the Barclays Center in Brooklyn, New York.