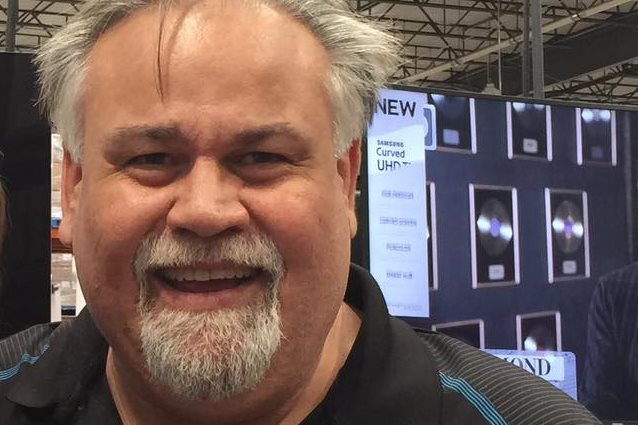 "Big Val" Bichekas, former bodyguard for PANTERA, Sebastian Bach and head of security for Ozzy Osbourne and ALICE IN CHAINS, has died. His passing was confirmed by both PANTERA and Bach, with the former SKID ROW singer writing on his Facebook page: "My heart goes out to the family and friends of Big Val Bichekas. We gave you your start on the road of rock and roll and now that road has come to an end, my friend. Thanks for watching out for me all over the world and say hey to Dime, Big Jim and Lumpy for me, dude."

ALICE IN CHAINS singer William Duvall said: "I want to take a moment to acknowledge the passing of Val Bichekas. 'Big Val' was ALICE IN CHAINS' head of security for years, including on the first tours I did circa 2006-7. He was essential to us during that period. Personally speaking, his ever-watchful eye and constant encouragement to me throughout that tumultuous time meant more than I can adequately convey here. Some gestures were big, some were small. They all mattered. I've thanked him personally in the past. But I feel compelled to honor his passing today by thanking him publicly. Thank you, Big Val. You are loved and missed. 'And now his watch is ended.'"

Arizona thrashers SACRED REICH wrote in a Facebook post: "RIP Big Val. He was always great to us and a member of the morning sesh team while the PANTERA dudes were still sleeping. Peace and love to you and your daughter."

CROWBAR said: "The CROWBAR family would like to send our condolences to the family of Val Bichekas!! He was such a great guy and friend to all!! We are deeply saddened by his loss but the memories and fun times that we shared will last forever!!! R.I.P. 'Big Val'.... you will always be remembered by soooooo many!!!!"

PANTERA drummer Vinnie Paul Abbott wrote: "We had some amazing times together!! Very sad to hear of the passing of Big Val."

Big Val had achieved some notoriety among PANTERA fans for his appearances in the band's home video releases, which eventually led to his getting fired by the group.

In his 2013 memoir, "Official Truth, 101 Proof: The Inside Story Of Pantera", PANTERA bassist Rex Brown wrote about Bichekas: "While he was always good at what he was employed by us to do, he started thinking that he was a rock god himself, as did quite a few of the crew by this point. We were always very close with the crew, like one big family most of the time, and when that's the case, it's not unusual to have people take advantage of you and rip you off, because they start to think they're entitled to what you have."

He continued: "The breaking point came when we found out that he was making his own PANTERA t-shirts with our fucking logo on them and planned to sell them front of house at shows. He wasn't a celebrity, he was a fucking security guard, but I guess it's inevitable and halfway acceptable to think you're a star when you're in a position like he was. But the line is crossed when a security guy starts using our name for his own monetary gain… So Dime [PANTERA guitarist 'Dimebag' Darrell Abbott] fired him. At least he finally saw sense and made the right call."

In a 2004 interview, Vinnie Paul recalled an incident involving Big Val when the PANTERA drummer went to see Ozzy Osbourne perform at the 2002 Ozzfest. "Dallas is our hometown, and obviously Big Val worked for us in the past, but we had a falling out with him and hadn't really spoken to him," he said. "The truth of the matter is — I'll tell you exactly what happened — I was going to the front of the house to watch Ozzy. I hadn't seen Big Val all day long or anything. I was walking along, and I had my girlfriend with me at the time, and I saw him and went to wave at him — then the dude just leveled me with one shove. I was there on my ass in front of 20,000 people walking out to see Ozzy. He just kept going, you know. My security guard at the time found out about it, and him and Val exchanged words. It never really went any further than that. I let it go. It's no big deal. I don't harbor any grudges or any hard feelings towards the dude or anything."

Bach remembered Big Val while writing a tribute to Dimebag in December 2004. He said: "The first job Big Val ever had in rock 'n' roll was — you guessed it — Sebastian Bach's personal security guard. Val met PANTERA on the 'Slave' tour and when Ozzy was looking for personal security, Sharon [Osbourne] asked Big Val, 'Who have you done security for?' He answered, 'Sebastian Bach was my first. PANTERA was second.' Ozzy hired him right away, and has employed him ever since."

Lost another member of the Pantera family. RIP Big Val.

We had some amazing times together!! Very sad to hear of the passing of BIG VAL 😥

My heart ❤️ goes out to the family & friends of Big Val Bichekas . We gave you your start on the road of rock & roll &...

I want to take a moment to acknowledge the passing of Val Bichekas. "Big Val" was Alice in Chains' head of security for...

So sorry to hear about the passing of "Big" Val Bichekas. R.I.P. My Friend. Kirk

The Crowbar family would like to send our condolences to the family of Val Bichekas!! He was such a great guy and friend...

RIP Big Val.
He was always great to us and a member of the morning sesh team while the Pantera dudes were still sleeping. Peace and love to you and your daughter.

RIP Big Val.... We just saw him last month. Big heart he had.

WTF......now Big Val died? RIP Big Man, I had some fun with you on those Ozzfests!

Sorry to hear about Big Val, he was always cool to us. #RIPBigVal

such sad news. Big Val was the man. #RIPBigVal https://t.co/dE3NRly3na