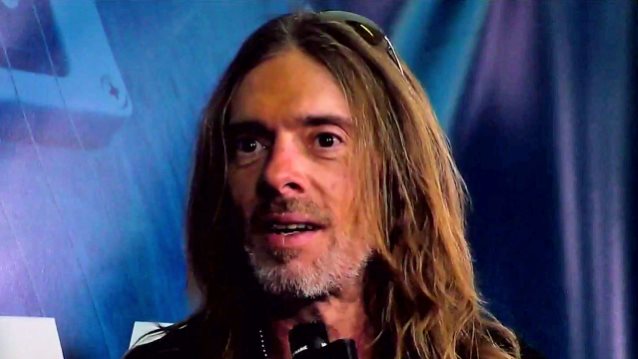 Brad Tolinski of BackStory Events conducted an interview with former PANTERA and DOWN bassist Rex Brown at this year's NAMM show, which was held January 19-22 at the Anaheim Convention Center in Anaheim, California. You can watch the chat below. A few excerpts follow (transcribed by BLABBERMOUTH.NET).

On his upcoming solo album:

Rex: "I've got a solo record coming out in June. I had to get off the road, man. I was on the road for 25 years. I had to get off that bus and live life and figure out what it was that I wanted to do next. This, to me… I've been playing guitar since I was young. I tried to play every day. Then I was a bass player, but I had to go back to my roots. Sometimes you have to go backwards to move forward. It's a labor of love, just getting the right songs. I had a great songwriter in Lance Harvill. He was a friend of Dime's [deceased PANTERA guitarist 'Dimebag' Darrell Abbott] back in the day. We came up with these amazing tunes with another couple of great Nashville people. Nashville had a lot to do with it. That whole scene is real. People are real there. It's a totally different story than say, up the road two hours [in Los Angeles]."

On whether there will be any special guests on Brown's solo album:

Rex: "No, it was a collaboration of the four of us. Christopher Williams, he's played on every record in Nashville since he was 16. He's now the touring drummer for ACCEPT. He can play anything that you want. We rehearsed exactly five hours before we went in and cut 11 tracks in the next three days. That was the basis, just to see how this thing was going to come along. Let the wind blow, man, especially at my point."

On whether he had some "personal" things to express with the album:

Rex: "It was cathartic. Trying to find that voice was the hardest thing. Not the hardest thing. I've sung background vocals when you're soloed up in the mix. But for this, we tuned the guitar down to B standard. Once you found that voice, then you have it. Then, you can fit it with any kind of song you want to do on this thing. Like I said, it's back to rock and roll. That's my love of '70s stuff that I listen to every day on my playlist."

On whether his 2013 "Official Truth, 101 Proof: The Inside Story Of Pantera" memoir helped him in the creation of his solo album:

Rex: "Maybe so. It opened up a little different avenue of how to do it. But that has nothing to do with what I did in the studio. We were just putting these tracks down and seeing what would happen, and it turned into this really insane thing we're doing. Not insane, but it's where I want to be musically right now. That's more important to me — and my family —musically, where I want to be right now than anything else. That's it, man. You don't have those, you're grounding together. You're just going nowhere."

On whether he will tour behind the album:

Rex: "I've got all kind of characters coming out with me. It's going to be fun. That's the fun part. We get to go and put this band together. I got a playlist of about four hours' worth of songs I'd love to cover. We'll just throw a couple in there. We're going to Europe. We're getting some really solid offers from some more rock outlets. That's what I want this thing to be; it's a rock and roll record. Metal guys, if you like it, come on. I think you will, but it's a diverse record."

On whether he will be playing bass or guitar when his solo band plays live:

Rex: "Both. I'm playing bass and guitar. It's going to be a flip-off… I'm excited. I got a really good deal. Just to be relevant...to me, this is just me. I'm real. I just happen to play guitar and I found a voice, and you all can dig it."

Brown previously described his solo album as "a rock and roll record. It's not your standard fare or typical metal thing," he told Metal Hammer magazine. "I was always a big [LED] ZEPPELIN fan and even though it has its little fringes of it... It's a new journey that sounds like anywhere from FOGHAT to old Tom Waits. I'm a child of the '70s and I love those kind of songs."