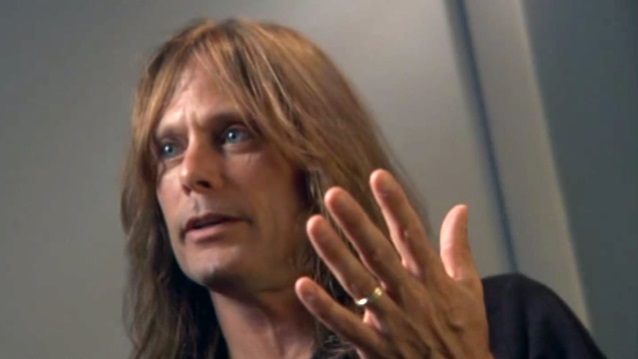 According to RawStory.com, founding OVERKILL drummer Lee "Rat Skates" Kundrat has written ad directed a new ad that uses graphic Holocaust footage in an apparent attempt to downplay the idea of global warming. Check it out below.

Skates, who grew up in a middle-class household in New Providence, New Jersey, has reportedly been making short videos for conservative causes for the last few years. The 53-year-old former musician raised eyebrows last December when he created a seemingly pro-Christian ad dubbed "War On Christmas" (see below) which was described by one site as "freakish and a bit disturbing." Skates also wrote and directed a short video in 2012 featuring teens puzzling over the policies of President Obama. The clip, which can be seen below, was described by Skates as "the boldness of Bill O'Reilly meets the encouragement of Joel Osteen in this street-level documentary and study guide."

Rat has been professionally involved in the filmmaking industry since 1999, writing and producing a wide variety of projects, from corporate advertising and television commercials to the performing arts. He also worked with director Rick Ernst as associate producer on the documentary "Get Thrashed".

In a 2008 interview with Metal Asylum, Skates stated the formation of OVERKILL and his eventual departure from the group: "OVERKILL was my band. I left it to everyone else to do whatever it was that they wanted with it.

"The bass player, D.D. [Verni], and I went to the same high school and we had a band together; it was a punk rock band. We got really heavy into JUDAS PRIEST and the heavy metal thing. I ran an ad in the paper that was answered by a guitar player from upstate New York and his friend was [singer Bobby 'Blitz'] Ellsworth. He brought Blitz along, who was a bass player first and ended up being the vocalist later. So it [OVERKILL] was something I put together, with D.D. supporting me.

"I left [in 1987] because of my dissatisfaction with the road and the business, which eventually resulted in me abusing alcohol. I left everything to my bandmates. I didn't take anything, didn't sign my way out of it contractually, which was my mistake. I said these are my friends and 'I just can't do this anymore, guys.' It has had a punishing effect on my life — it really did — and it's hard to talk about. I thought, if these guys want to continue with OVERKILL, I'm not gonna stop them. After that, things obviously changed quite a bit."

Skates in 2007 released "Born In The Basement", an autobiographical documentary about thrash metal's "old school" and their "DIY" mindset.