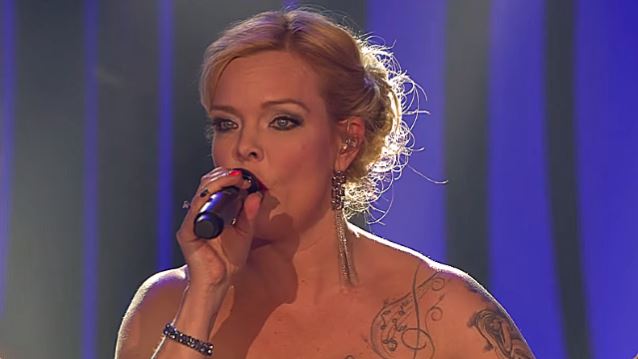 In a recent interview with Metalgossip, former NIGHTWISH singer Anette Olzon spoke about the reaction to her debut solo album, "Shine", which was released in March 2014 via earMUSIC.

"This album was originally meant to be released while I was still the singer in NIGHTWISH and therefore I didn't make a metal album, 'cause I didn't want to compete with my own band," she said. "Then, when I was gonna release this later, the songs I did back then were too good to exchange with other more rockier songs, and therefore the album is softer."

She continued: "I haven't seen any sales figures yet, but, of course, it's the first album and I am going a new direction, so I don't believe in super numbers. I've read a lot of super-nice reviews in many countries, and it is a good album, so I am happy people that make reviews have heard that."

Asked if she has already started working on songs for the follow-up to "Shine", Olzon said: "Not so many new songs yet, since me and the label are discussing when and how the album will be released. I have some new songs that I've performed live, like 'Strong' and 'Hiding From The Past', and then some songs that I've done but haven't recorded yet. I am studying, so the time for music is a bit smaller nowadays. I write songs in any mood, but I do prefer to be a bit sad or angry when writing songs since they are a vent for me to my inner feelings."

Olzon also talked about her deeply personal lyrics and whether she is afraid to share so much of herself with the public through her music. "No, not at all," she said. "I am a very open person when it comes to that. I am like any other person, with all those ups and downs life throws at you. I don't walk this earth to pretend to be a musical person that only writes cryptic lyrics. I prefer to listen to music myself where I can understand and feel the lyrics without a thousand metaphors."

"Shine" received mostly positive reviews, despite its lack of metal overtones and its reliance on pop hooks and grandiose arrangements.

During a late 2014 question-and-answer session on her Facebook page, Olzon revealed that she had "decided to part ways with my record label and go on my own. [In the future, I] probably will release most stuff only in the Internet and iTunes and so on, since album sales are so bad nowadays."

Olzon did, however, make it clear that those fans who are expecting to see her pursue a more metal-based direction on her next album will likely be disappointed.

"I come from another musical background, and when I write music, it doesn't come out as metal," she said. "But, of course, some songs might be a bit harder, but metal is not my music style."

In an interview with Metal Blast, Olzon stated about how she has been portrayed since her departure from NIGHTWISH: "It was really hard for me. You can always say 'no comment' and say nothing about what happened, or you can open your mouth, as I have done. It was really hard for me to decide if I should say something or if I should keep quiet. But I felt that in order for me to move on, I needed to tell my story. I also knew that there would be a lot of hate and negativity directed toward me; I can feel that many people do hate me because I have told people my truth. At first people were a bit more negative, but since then it has been less and less of that. I know there's some negative PR, but people who know me would say it's a big laugh, me being called a diva."