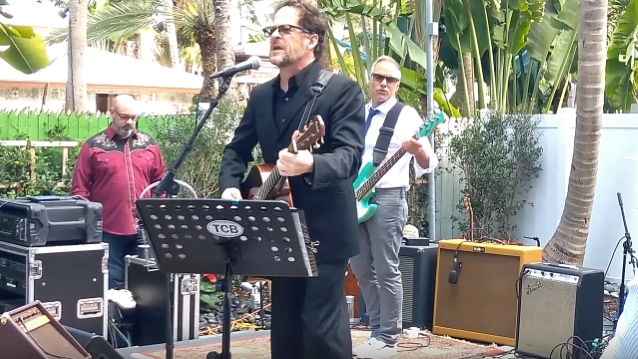 Former METALLICA bassist Jason Newsted is having his first solo art show presented in Miami during Art Basel, which runs December 3 to January 4 at The Sagamore Hotel. The exceptional exhibitis a survey of 12 years of work, along with new, site-specific installations that reflect Newsted's lifelong commitment to painting inspired by his extensive career as a Grammy Award-winning musician. His visual display illustrates the dynamic parallel between music, history and human expressions.

Jason performed live with his ensemble, THE CHOPHOUSE BAND, at the event's private opening on December 5 and played again at the Sagamore Brunch on Saturday, December 8.

Video footage of Newsted's December 8 appearance can be seen below (courtesy of YouTube users "Theresa Barr" and "BN Bomb busters").

Nearly five years ago, Jason shelved NEWSTED, the heavy metal project he operated between 2012 and 2014, saying that it cost him "an awful lot of money — hundreds of thousands of dollars." He added: "I couldn't continue because the business is such a harsh thing now and so different than what I had known."