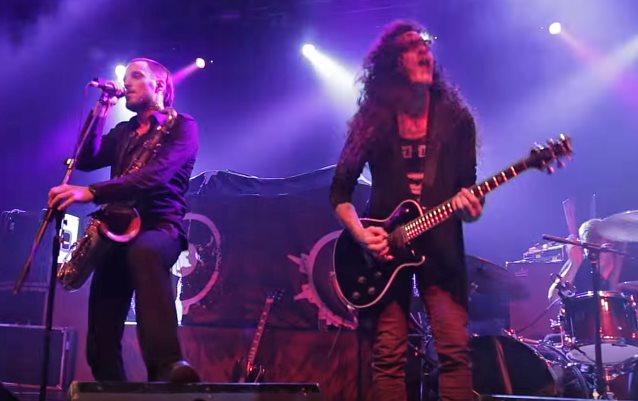 "Meat Hook", the new video from former MEGADETH guitarist Marty Friedman, can be seen below. The song, which features a guest appearance by Jørgen Munkeby of the acclaimed "blackjazz" act SHINING, is taken from Friedman's latest solo album, "Inferno", which was released in May 2014 via Prosthetic Records (except in Japan, where the album was made available through Universal Music).

In an interview with Metal Discovery, Friedman stated about "Inferno": "I wanted to do a really unique album and not just having guests on it, but guests that write songs. Not just guest solos because everybody does that; I wanted the guests to have real commitment. And I wanted the guests… it's kinda selfish, but I wanted guests that really have openly admitted that they like my music and been influenced by me and stuff.

"I remember Michael Schenker asked me to join him on a project once and I remember how I felt because I was his fan, of course… I wanted to give three thousand percent. So I wanted to get that reaction out of other people who are really good, and that was the concept."

Regarding the "Meat Hook" video, Friedman told Billboard.com: "'Meat Hook' was one of the few times that a guitar riff shot a vivid image into my mind as I was writing it. That's pretty rare, so I kept that concept of the image I had in mind when it came time to make a video. It was the image of all these massive slabs of meat on hooks, kind of like in the movie 'Rocky'… No idea why the image came to me. Maybe it's because the actual guitar riff is quite aggressive, and when you play it you really feel the stamina of your muscles going at full throttle. If a guitar riff could be physical or 'animalistic,' the main riff in 'Meat Hook' could be described that way."

"Musically, the tune is kinda gory, and there are a lot of tension-and-release moments in it," continued Friedman. "That's like the concept of meat, in the way that slaughtering anything is grotesque and reprehensible, but once the thing is killed, then it gets all dressed up and pampered and seasoned, so when you are eating it, it can be blissful. Kind of a strange turn of events, isn't it?"