Commented Glen: "I just arrived back at home from playing a New Year's Eve show with TESTAMENT in San Francisco, and it was wicked!!! The crowd was completely wild and I had a blast! We pulled out a lot of old songs from the past, including 'Curse Of The Legions Of Death' (with [former EXODUS/LEGACY vocalist] Steve Souza singing alongside Chuck [Billy, TESTAMENT frontman] — see video below) 'The Haunting' and 'Raging Waters'. I want thank all the guys in TESTAMENT for a great time over the holidays and good luck on the upcoming [tour with JUDAS] PRIEST [and MEGADETH] in Europe!"

Glen previously filled in for TESTAMENT's Alex Skolnick on the band's Mexican dates with JUDAS PRIEST because Skolnick had prior commitments with the TRANS-SIBERIAN ORCHESTRA.

Drover was interviewed for the November 12, 2008 edition of "The Metal File" podcast from Montreal's CHOM-FM. You can stream the show online at this location.

Drover left MEGADETH at the end of 2007 and was replaced by Chris Broderick, who has previously played with NEVERMORE and JAG PANZER. 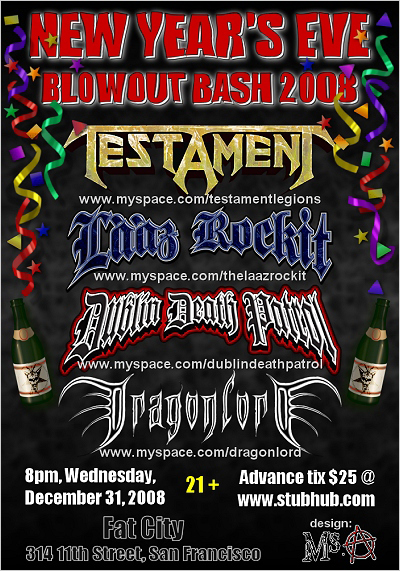 "Curse Of The Legions Of Death" (featuring Steve "Seztro" Souza):