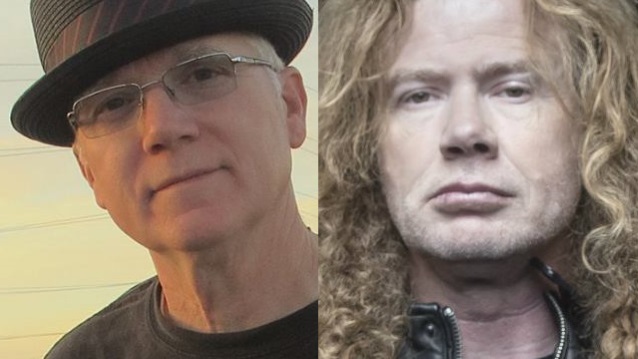 Former MEGADETH guitarist Chris Poland recently spoke with the As The Story Grows podcast. The full conversation can be streamed at this location. A few excerpts follow (as transcribed by BLABBERMOUTH.NET).

On nearly rejoining MEGADETH after the "So Far, So Good... So What?" cycle, and his belief that declining the band's offer to rejoin while renegotiating royalty rates led to his removal from the roster of Capitol, MEGADETH's then-label:

Chris: "When I got my '[Return To] Metalopolis' deal with Enigma, it was originally on Capitol Records, but Dave [Mustaine, MEGADETH mainman] — he kept asking me to join MEGADETH again. I actually was 99 percent going to join MEGADETH, and then Janie [Hoffman], who was managing me, for two days, she told me, 'If you join that band, you're going to die.' I'm totally sober [at that point], and I'm not 100 percent sure that they are. She said, 'If they're not sober, and you join the band, you're not going to make it.' The first time I met her, I was coming off the bus going into the Santa Monica Civic Center to do a gig. She looked at Andy Somers, our agent, and said, 'He's going to be dead in a month.' And something happened. All of a sudden, I just hit bottom. After the firing, which was basically, I was late for a MEGADETH meeting — I couldn't get a ride. I didn't have a car. I couldn't get there. I finally get there. Dave's gone, so I can't get my $200 per diem, so I had no money. I call him up on the phone, I said, 'Dave, I couldn't get a ride. I'm here now.' He goes, 'Well, I don't care. You're not getting paid.' I said, 'You know what, man? Why don't you fire me?' I said, 'Oh, wait, I know why you won't fire me — because I don't think there's anybody that would put up with how you treat people.' We had a big blow-out, and two days later, I get a letter at my girlfriend's house saying, 'Your services are no longer needed, and have a good life.' I was like, 'Whoa!' That's when I hit bottom, about a month after that. I had no money; I was totally in a bad place; I finally just called home, and the rest is history. [Years later,] Janie finally said, 'Hey, man, you just got yourself a [record] deal. You have a deal to do what you love doing. Why are you going to do that?' I said, 'You know what? You're right.' I'm not saying she talked me out of it, but she was the voice of reason. I thought, 'There's a chance it could happen, that I could start using again.'

"At the [negotiating] table, they had told me that Marty Friedman was on the block for the position, and I thought, 'You know what? That makes it easy for me, because Marty's a freaking animal. I said, 'Hey, why don't you guys use Marty? I have this deal; I've worked very hard for it; and it was on Capitol.' They were upset — and granted, I understand, because they did all this work with our attorneys, and I'm sure that they felt like I did that just to get that money, but that's not what it was about. It was about, 'Let's make everything level here.' I didn't need money for drugs anymore; I just wanted what me and Gar [Samuelson] were due. We kind of got, like, tossed to the side there. I think they thought Gar was going to die. I had my deal with Capitol, and the next thing I know, I don't have a deal with Capitol. All of a sudden, I have a deal on Enigma now. It's a mystery to me to this day. I'm not going to say it out loud, but I have a feeling it had something to do with what happened at that table when Marty got the gig in MEGADETH. Now I'm on Enigma, a subsidiary of Capitol. To make me feel better, they gave me, like, an extra $50,000. I was like, 'Okay.'"

On additional legal issues surrounding the 2004 reissue of "Rust In Peace", which contained demos on which Poland performed:

Chris: "When I did 'The System Has Failed', he was working on adding the demos to a re-release of 'Rust In Peace'. And I wasn't going to get paid, but I didn't realize that until it came out. I was like, 'Wait a minute — I'm not getting paid for this.' And I tried to call Dave at least a dozen times, and I never heard back from him. Then I called Dave's manager a dozen times, and he wouldn't get back to me. The last time I called him, I said, 'Hey, man. If you don't call me back, I'm going to call [my lawyer], and we're going to have to get into it.' [The manager] calls me back and totally insults me, saying, 'You played a couple solos. So what?' And I'm like, 'What do you mean, 'So what?'' 'Well, Dave thought that you would do it for the fans.' I said, 'Okay. Is everybody else that played on that demo doing it for the fans? Are they getting paid?' He said, 'Chris, that's not the point.' I said, 'Listen, man, we have to do something here. I'm not just going to walk away. I love the fans, but I'm just not going to do it. If everybody else is getting a performance royalty for this, I want one.' I want everybody to know that it wasn't a nuisance suit, it wasn't anything like that. I made every attempt to work it out, and they just ignored me."

Chris: "Here's the thing with Dave — he knows what he wants, and as long as he's not crazy drunk, he's a great guy. When we did 'The System Has Failed', it was awesome, man — it was fun. It was a learning experience; I met Ralph Patlan, who helped me mix my next record. The thing about Dave Mustaine, you know what you're getting. He doesn't hide anything. It's not, like, a mystery."

For the past 20 years, Poland's main musical focus has been the fusion band OHM:, which has released three full-length studio albums to date.

I respect Chris' playing, but he sued me for putting demo tapes that I paid for on the RIP reissue, in what is commonly called a "nuisance law suit." @KikoLoureiro is my partner. Please accept that or go away. https://t.co/H3ctZDush6

Chris sued me for $9,500 bcuz I put the demos I paid for on the RIP reissue. It’s called a nuisance suit and he sold out our friendship for four figures. I’ll always appreciate him being in Megadeth, but not as much as I do him NOT being in Megadeth. https://t.co/PvRKVHsDXQ