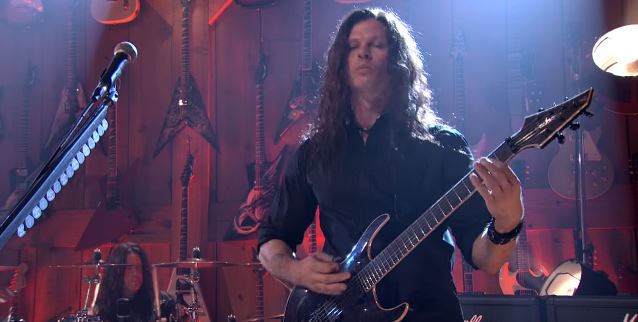 Former MEGADETH and current ACT OF DEFIANCE guitarist Chris Broderick is selling one of his Jackson CB-6 signature USA six-string guitars. All profit will go to his former NEVERMORE bandmate Van Williams and his wife Dori, who are still dealing with all of the expenses of Dori's fight with cancer.

Says Chris: "I have played [this guitar] across the world with MEGADETH and it does have some wear due to me thrashing around the globe with it, but plays and sounds great.

"I will sign it where the winning bidder would like, which would make a great collectable item in anyone's guitar collection.

"There is only a couple of weeks left until Christmas so pick this great guitar up and remember that it's to help Van and Dori with their fight against cancer."

You can see the guitar in action in the videos below.

For more information, and to place a bid, go to this location.

Broderick recently told MetalMasterKingdom.com that he still plans to release a solo album in the not-too-distant future. He said: "Oh, yeah. [I]will definitely will. Absolutely. I've got one song that's like a total mixture of metal and flamenco. And then I've got another song that has classical guitar elements on it. And then another one that's a little bit more experimental, a little but more maybe on the slightly jazz-fuzion side of things. So it's pretty interesting stuff."

Asked if his solo album will be all instrumental or it will contains songs with vocals, Broderick said: "I've considered both. And where I'm looking at right now is… what it's looking like is about fifty percent of the songs that I do are gonna be instrumental, and the other fifty percent, it's gonna be sung. So far, I'm demoing the vocals on it, so it may be me doing it. I don't know. I still haven't decided about that."

Broderick also confirmed that he intends to release a guitar instructional DVD. He said: "I've talked to numerous different companies about doing it, and just haven't really sat down and laid out a lesson plan — something that I'd really like to teach."