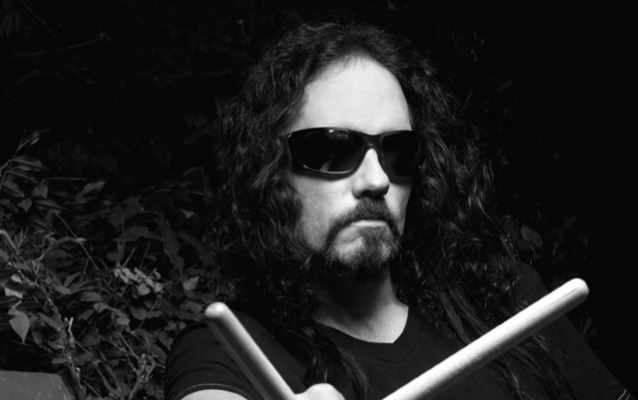 Metal Wani's Debarati Das and William Richards recently conducted an interview with former MEGADETH drummer Nick Menza. A couple of excerpts from the chat follow below.

Metal Wani: Fans are very excited to see you [and fellow ex-MEGADETH members] Chris Poland and James Lomenzo come together and form a band. So how did it all happen? Other than the obvious ties to MEGADETH, what brought the three of you together?

Menza: Poland, Lomenzo and I decided to get together for a jam session last month. I also had a jam session with Lomenzo at the Disintegrator Studios back in June where we cycled around some of old MEGADETH, some METALLICA and LED ZEPPELIN. We began exploring a bunch of riffs we had, just to figure out what fits and what doesn't. That's how it began.

Metal Wani: How would you define the sound of the new project? Some have described as "LED ZEPPELIN meets METALLICA." Does the songwriting adopt a straightforward approach or is it an amalgamation of different styles?

Menza: Well, this new project is nothing like whats been heard already. The sound is gonna be heavy, but that being said, it will also be a massive mixture of different styles, aggression and creativity. We like to enjoy to the fullest, playing our music and that is exactly what it is gonna be like. It might have some elements reminiscent of the bands you mentioned but the new material is gonna sound very different and pumped while we have fun playing it.

Metal Wani: Have you thought about any name for the project yet?

Menza: Oh yes, we have. But we haven't finalized the name yet. The name of the project will be something that is reflective of the "monstrous" heaviness and aggression asserted by its sound.

Metal Wani: Do you intend to do any tours with this band, or are you planning to pursue it solely as a studio endeavor?

Menza: As of now, we're focused on having our new material out there. We're doing what we like to do best — enjoy playing! We have a bunch of bold and dynamic material which we are gonna take to the next level. Once the release is out there, we might develop this writing and recording endeavor into a touring one as well.

Metal Wani: Do you have any plans about including a guest vocalist?

Menza: We're still developing the core material with a conglomerate of different musical styles while feeling each others energy as musicians. As of now, we're focusing on the instrumentation because it is smooth and efficient this way. We'll bring in vocals once we've set the direction in which the sound will proceed. We're in no hurry concerning the vocals because incorporating that element prematurely might just tend to slow things down.

Metal Wani: When you're on drums, there's a different energy altogether, as compared to most of other MEGADETH material. You took quite a long break in your journey. But dedicated fans never stopped wanting you back in MEGADETH.

Menza: Yeah, I took a good ten, twelve years off and then I came out of the retirement I was in for a while. A lot is happening at the moment, and I'm focused and I'm enjoying. I am not relying on any reunion but am happy to be taking things in the direction I want. It's pretty much happening already.

Metal Wani: Rather than beating around the bush, I want to ask you outright: how good or how bad has your experience been with Dave Mustaine and MEGADETH?

Menza: As I said, I had my time with Dave and some memorable experiences in MEGADETH. On the other hand, MEGADETH is only one chapter of my story. Nevertheless, I have big plans for the future and I am excited about defining my own direction as a musician, putting my music out there.