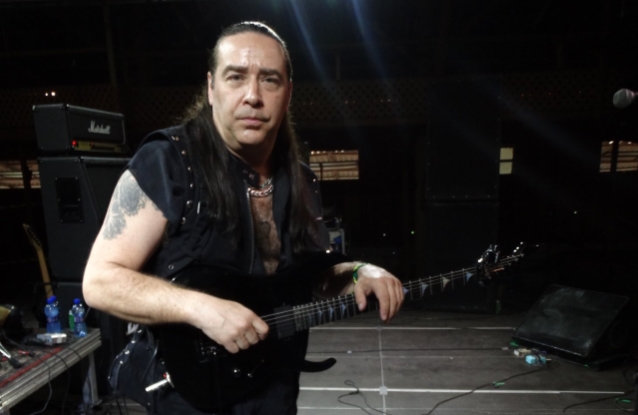 Former MANOWAR guitarist David Shankle says that he would be "happy" to return to the band in the wake of this week's news that his replacement, Karl Logan, will not be touring with the group after being arrested on charges of possessing child pornography.

MANOWAR's farewell tour, dubbed "The Final Battle", is scheduled to resume in February 2019 in Tel Aviv, Israel before several dates in Russia and Eastern Europe, Scandinavia, Germany and a headlining appearance at France's Hellfest.

On Friday, Shankle posted a lengthy statement on his Facebook page in which he revealed that he has composed the sequel to "The Triumph Of Steel', the sole MANOWAR album he appeared on, and that he is recording these songs with a band called FEANOR. He also said that he has "always had the best relationship with Joey [DeMaio, MANOWAR bassist], Eric [Adams, MANOWAR singer] and all the other guys that I consider nothing less but brothers, so if duty calls my door, I will be happy to be present my weapons once again."

Shankle's statement in full: "After thinking a lot, I consider appropriate to put together some words about the unfortunate events that have happened recently with Karl, which are of public knowledge and I will not repeat here. I just want to emphasize that I believe in the justice of my beloved country and I am sure that the truth will come to light very soon. Meanwhile, I want to thank you all for the innumerable messages I am receiving. For that reason, as I said before, I consider important to say a few words.

"For those who do not know, I joined MANOWAR back in 1988 after overcoming a casting from around 150 guitar players. I can proudly tell you that I was present during the mix of the iconic 'Kings Of Metal' and I had the privilege of doing the tour to present the album. As everyone knows, I did not intervene in the composition of such a great album. Situation that changed on the double-platinum-awarded 'The Triumph Of Steel', where I composed approximately half of the material.

"I always thought about the sequel to that album; both me and all the fans always imagined what the second part would be like... Well.. the truth is that the second part is already composed and is now being recorded together with my brothers of FEANOR. Along with them, I have forged 10 songs of roaring steel, including 'The Odyssey' in seven parts, an epic song like all of you expected and waited for so long... Well, the wait is over!!! Get ready to listen to how Achilles should have evolved, Ride The Dragon, Master Of The Wind... Now I can show you, and in fact, I will show you how was the continuation of those songs that I kept for many years in my head.

"Today, as you can imagine, I am full of duties and responsibilities, but it is also true that I am part of the MANOWAR family, I always had the best relationship with Joey, Eric and all the other guys that I consider nothing less but brothers, so if duty calls my door, I will be happy to be present my weapons once again. As always, I will give the best of me, 100%, as I did in MANOWAR and as I currently do in FEANOR, with whom I will do an extensive tour of South America in November.

"Finally, thanks once again for so much love and for so many beautiful words. I know that many of you want me back in MANOWAR, but the reality is that I am very excited about the record that we ended up with FEANOR and that I know, I'M SURE, all of you will enjoy greatly.

"I do not know what destiny has for me, I can only assure you that The Shred Demon is more active than ever and very soon we will see each other again on the tour and they will be able to listen to the tremendous new songs that I have for all of you. I love you all."

A spokesperson for the Charlotte-Mecklenburg Police Department told Billboard that the arrest information likely came to light this week because of a reporter's inquiry into the case.

MANOWAR confirmed in a statement that Logan "will not perform" with the band while the guitarist and "his attorneys are dealing with these issues."

Karl joined MANOWAR in 1994 as the replacement for Shankle.