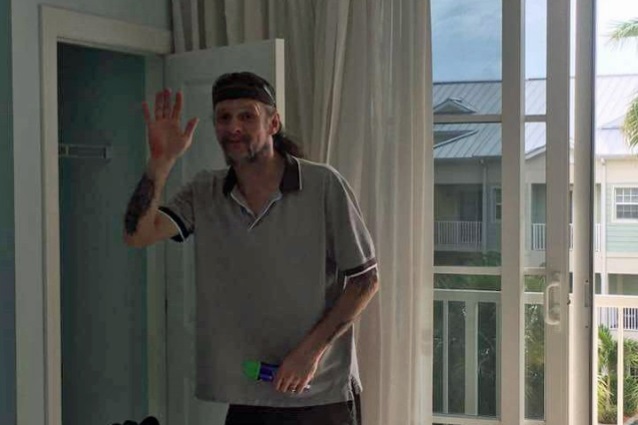 A fundraising campaign has been launched for former MALEVOLENT CREATION frontman Bret Hoffmann, who was recently diagnosed with stage 4 colon cancer.

The GoFundMe page, which was started by Bret's "very close friend/family member" Tina Kuntz Mielcarek, is asking for donations to cover his "medical expenses and treatments."

Said Bret: "I have been in hospital for almost two weeks now. I've had a MAJOR surgery, many proceedures and tests. Have not eaten that entire time and have not even smelled the outside air in that time. I am, however, progressing forward. They do want me out so that I can go home and heal and rehab. That may take weeks. After that, they have a treatment they are confident in for my cancer.

"I know I have a long road and life has changed. I will still finish new album and do music. I just have a bit more important task at hand for the near future. This ,so far, has been the most trying, painful, torturous event that has EVER happened to me.

"I am on the battlewagon and I'm rolling!!! My wife, Kim, has been a rock for me!!! I love her with all my heart!!! My very close friends have all been battling with me and I've needed that support."

In a 2015 interview with Metal Rules, Bret was asked about how he developed his unique vocal style. "When I grew up, I knew I wanted to sing," he said. "I was playing bass at first and I kind of sucked at it. I tried singing and sucked at it. So I went into my room for like two years and practiced singing old JUDAS PRIEST and IRON MAIDEN with [Bruce] Dickinson. I practiced those screams and could do them pretty good. Then when I transitioned over to death metal it worked because I learned the right way how to do those screams. It worked."