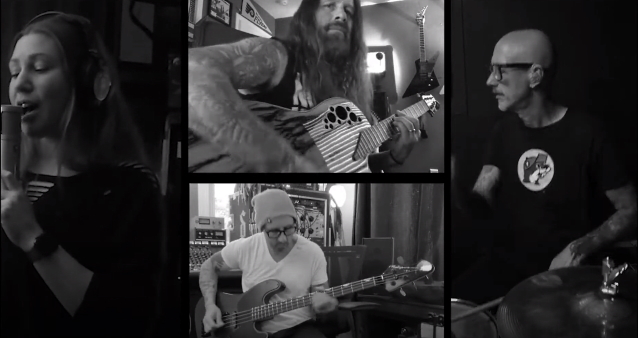 Regarding how the cover came together, Demmel said: "'No Excuses' is a song I had been wanting to cover with our cover band THE MERKINS. On the anniversary of Layne's [Staley] passing (April 5th), I asked Marta if she would want to record it in our home studio where it would be the 1st vocals I've recorded there and her 1st time recording a lead vocal track. It was a fun learning experience so we asked our friends, Dave McClain and Eric Bass to help complete the track. We've decided to share that experience with you all knowing that it's far from perfect, as we all as humans are."

Demmel announced his exit from MACHINE HEAD in October 2018, explaining at the time that he wanted "to step away and do something else musically." Phil, who first played with MACHINE HEAD frontman Robb Flynn in VIO-LENCE in the late 1980s and early 1990s, went on to complete MACHINE HEAD's "Freaks & Zeroes Tour" before officially leaving the band.

Demmel has spent the past year playing sporadic shows with the reunited VIO-LENCE, which recently inked a deal with Metal Blade Records. The band's new EP is tentatively due to be recorded in the coming months.