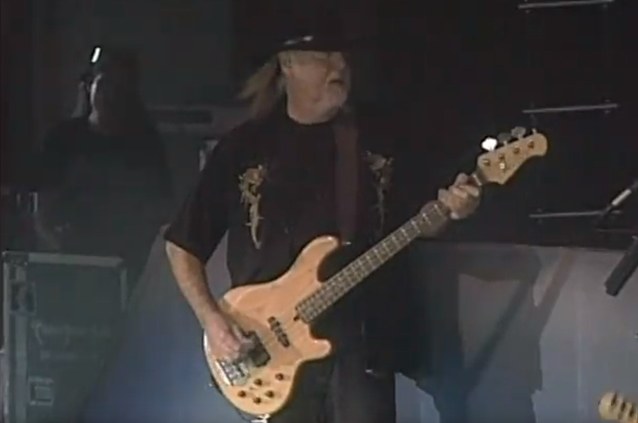 LYNYRD SKYNYRD's founding bassist Larry "L.J." Junstrom, who was also a longtime member of 38 SPECIAL, has died. He was 70 years old.

38 SPECIAL broke the news of Junstrom's passing in a post on the band's Facebook page. "The Big Man on the Big Bass has left us," the post reads. "He rocked arenas all over the world and succeeded in living his dream. He was truly one of a kind, a congenial traveling companion and a great friend to all with a humorous slant on life that always kept our spirits high — a kind man with a big heart for everyone who crossed his path. There will never be another like him.

"We are sending our devoted love, strength and comfort to his wife Thania and Larry's family. We will miss our friend and partner."

A member of an early incarnation of SKYNYRD, Junstrom left the band prior to the recording of its debut album, 1973's "Pronounced Leh-Nerd Skin-Nerd". He joined 38 SPECIAL in 1977 and performed and recorded with the group up until his retirement in 2014.

Junstrom described the performance in front of an audience of 100,000 people at Soldier Field in Chicago as unforgettable.

"The acts on the bill were JOURNEY, SKYNYRD, TED NUGENT, and several other bands," he said. "I was so nervous before that show that I could not sleep for three nights before, but once I hit the stage, it was natural, and everyone said I did great."

Junstrom's cause of death has not been revealed.

The Big Man on the Big Bass has left us.
He rocked arenas all over the world and succeeded in living his dream.
He was...