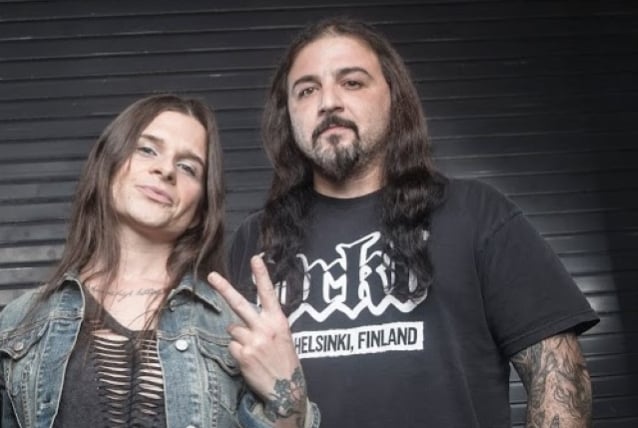 Former LIFE OF AGONY drummer Sal Abruscato has slammed the band's transgender lead singer, Mina Caputo, after she apparently accused him of being a "bigot" and "homophobe" who "hates his own pathetic life."

Sal took to his personal Facebook page earlier today to post a screenshot of a purported Twitter exchange between a fan and Caputo in which the fan asked the vocalist: "Sal Abruscato claims you voted for Trump - is that a lie?" Caputo allegedly responded in a tweet that has apparently since been deleted: "Poor Sal was kicked out of Type O Neg kicked out of LifeOfAgony 2x, is a bigot, homophobe-Transphobic Supprtd TransBan in Military He's a gas-lighter amngst his(wht was his mst loving friends)He's Envious Spiteful combative & hates his own pathetic life Contemplate that genius!"

In his Facebook post, Abruscato addressed Caputo's comments, writing: "Look at what this piece of shit tweeted about me on Oct 25. I haven't said a word in 10 months, just been busy with my album and you suddenly need to talk smack about me. #fuckyoumina #janisjoplinsuglytwinsister"

Mina Caputo, formerly known as Keith Caputo, came out publicly as transgender in 2011. A few months later, she told Noisecreep: "I got a lot of grief for it, but it was nothing compared to the years of pain I went through not being open about the way I felt inside."

Abruscato told the press in 2012 that LIFE OF AGONY could no longer play live because "Keith wants to pursue his life and his lifestyle," but the band was eventually convinced by its agent to reunite again in 2014. Caputo told Rolling Stone in a 2017 interview that she felt hurt by Abruscato's comments and approached him about them. She claimed at the time time of the interview that there had been a misunderstanding. "Now he's, like, 'My fuckin' girlfriend's here!' when he sees me," she said. "All of the members of the band are so wonderful, holding doors open for me, carrying my bags, making sure I'm safe. They treat me like they treat their wives.

"I think it's so beautiful, and I think it's so special," she continued. "What people don't understand is not only are we transitioning ourselves, but the people around you need to transition as well… I hope to marry a man just like one of the boys in the band. Because they're very loyal."

Abruscato announced in December that had "amicably" left LIFE OF AGONY. He has since been replaced by Veronica Bellino, a New York native who has previously worked with DMC, LL Cool J, Carmine Appice and Jeff Beck.

Last year, LIFE OF AGONY issued "A Place Where There's No More Pain", its first LP in 12 years and first since Caputo's transition. 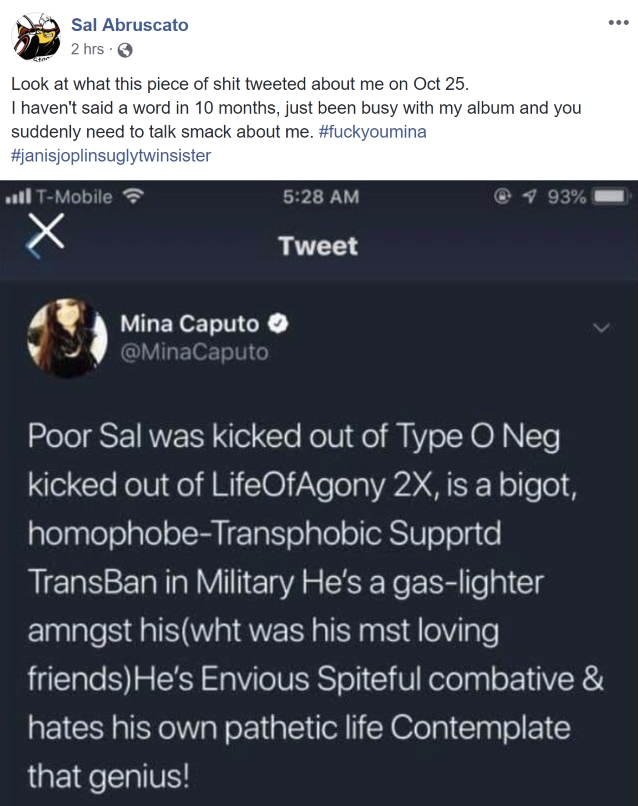