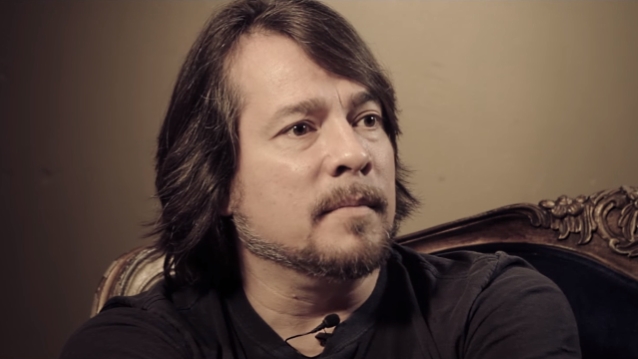 Former KYUSS vocalist John Garcia recently spoke with Invade TV. The two-part conversation can be seen below. A few excerpts follow (as transcribed by BLABBERMOUTH.NET).

John: "Any of the bands I'm about to mention, there's no comparison — KYUSS is not on the same level as LED ZEPPELIN or BLACK SABBATH or DEEP PURPLE or LEAF HOUND or BUFFALO. When you're a kid and you're in high school, you get turned on to stuff. You know who the music heads are in high school. You know if someone's, like, 'Hey, have you ever heard of this band? You've got to trip out on this band.' I still do that to people that go, 'What are you listening to?' I'll say, 'I'm on the SANTANA 'Abraxas' kick, and I can't stop listening to side B,' and I'll turn Ehren Groban, my guitar player, onto that record. It's just about passing tapes back and forth, or CDs or MP3s or records or whatever. For some reason, KYUSS falls into a lower category, I believe, of people still digging those tunes, and I'm certainly appreciative to the fact that I got to share a stage with Josh [Homme] and Scott [Reeder] and Brant [Bjork], Alfredo [Hernandez] and Nick [Oliveri]. I appreciate the fact that I'm here talking to almost a complete stranger talking about this stuff. It blows my mind that I'm here and talking about something that I helped create 20 years ago. That, to me, is a trip."

On separating fact from fiction:

John: "There's a common misconception that I get up in the morning and take a bong rip and then put on some stoner rock. That's not further from the truth... This is my own personal opinion, but I think that the over-glamorizing of the generator parties was exactly that. I think it was blown out of proportion a little bit, partly by KYUSS too. We used to push that. As far as tripping while I was out there, I think that every kid will go through an experience, one or two, where you do exactly that — you experience, and you experiment. How much of that involved doing some of that stuff and the music, I don't think it had a large part of the writing process at all. As a matter of fact, I think that it was quite the opposite. I think that there were maybe a few sessions that might have had some pot and some alcohol. I remember sessions over at [the Joshua Tree, California-based recording studio] Rancho De La Luna where there were some 'shrooms going around, but it wasn't a daily thing. It was just once that I can recall. I don't think it's as big as people have made it out to be. I think it was just part of growing up."

On his continued passion for music:

Garcia's latest project, JOHN GARCIA AND THE BAND OF GOLD, released its self-titled debut album — which was produced by Chris Goss (KYUSS, QUEENS OF THE STONE AGE) — on January 4 via Napalm.