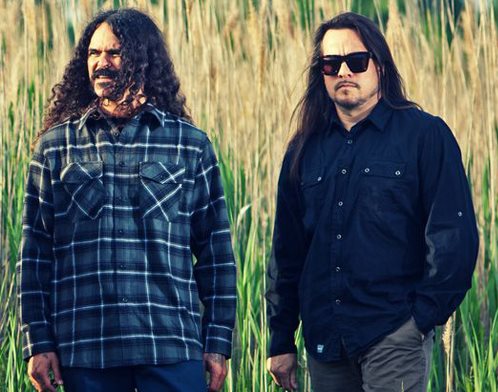 Skwerl of Antiquiet recently conducted an interview with former KYUSS and current VISTA CHINO singer John Garcia and drummer Brant Bjork. A couple of excerpts from the chat follow below.

Antiquiet: First, do you think the media got the story straight [with the lawsuit between you and former KYUSS guitarist Josh Homme and bassist Scott Reeder over the rights to the KYUSS name]?

Brant Bjork: No. The media, you know, nine out of ten times, never gets the story straight. And I think part of [Josh Homme's] strategy from day one was to, you know, set things up so the media wouldn't get things straight. That's kind of been the cornerstone of Josh's whole trip for years. And this lawsuit was just a super extreme extension of that kind of manipulation and falsity. It's a real drag and it really makes it stressful and painful and frustrating, because you know, he's got a voice and he's got a lot of money. When you're dealing with someone who is aggressive and bitter and bullying you with that kind of power, it's a difficult thing to manage.

Antiquiet: You think he manipulated the media as just a "scorched-earth" move to make his point, or what?

Brant Bjork: Well, I think he just wanted to smear us and, I mean, he falsely accused of things that we never did. In fact, the irony is that he publicly accused us of something that, technically, he did. If anyone infringed on a trademark, it would have been him. But once again, when you get pulled into a lawsuit, it's not usually based on law or principle, it's usually based on economics. He knew from day one that we don't stand a chance economically. John and I fought as hard as we could, and we educated ourselves, and I studied the law every day, but in the end we just couldn't afford to move forward, there was just nothing we could do.

John Garcia: The whole thing was unnecessary. We never tried to steal the name. I think it could have been settled with one phone call, by Josh calling me and going, "Hey, dude, change the name or I'm going to sue you." As simple as that. But it was, you know, I think it was a huge embarrassment, for Scott and Josh, and as well as Brant and I. Brant and I don't like parking tickets, let alone federal lawsuits slapped upon our… I mean, who does?

John Garcia: To answer your question, sorry about going off on a different avenue there… I didn't really read a lot [of media reports], but the truth of the matter is that it was truly unnecessary. It could have been settled. Brant and I fought, I think put up a pretty good fight, but in the United States, sometimes those with the most money — I think the majority of the time, those with the most money — win. And we decided that it was worth the initial fight, but in the end, it got to the point where we thought it would be much, much better to stop it. The lawyers, and the bills, it took a little bit too much of a toll on us, and we said, "Look, we're going to change our name."

Antiquiet: If Josh had just called you up, ahead of time, and said, "Look, change the name or I'm going to sue you," are you saying you would have done that, you would have changed the name? Or did the fight have to happen, in some form?

John Garcia: Well, it could have been that simple. But because of his, you know… At first he loved the idea [of us playing KYUSS songs under the name KYUSS LIVES!]. I mean, everywhere [he] went, "Hey, what do you think about John and Brant doing this stuff?" "Oh, yeah, go get 'em, guys. Fuckin' more power to you. Fuckin' kick ass…" And then all of a sudden, he thought that we were trying to steal the name, to trademark the name. And that was not true. We were never going to be called KYUSS. It was always KYUSS LIVES! And we had three band members — four of them. Fuck, me, Brant, Nick and Scott Reeder are playing in the band. So, you know, we never meant to steal the name, we never wanted to steal the name… But I think, yes, to answer your question, I think if Josh would have called me up, or emailed me, and said, "Hey, change the name, or I'm going to sue you," I would have said, "Okay." Absolutely, 100%, yes.

Brant Bjork: No one wants conflict. John and I want to make music, you know? We all have our own individual beliefs, and John and I, and I think I speak for Nick [Oliveri, former KYUSS bassist] as well, John asked me in 2010 to get KYUSS back together. He didn't ask me to start a new band. I wouldn't have been interested in starting a new band. And that's what we did. KYUSS was, you know, I feel obligated to say it these days, but you know, KYUSS was a band that I started, and it was a name that I found. I didn't see any reason in having to change it. And if we would have been threatened, we might have looked at other options to avoid any kind of complications, just so we could focus on getting the music to the people, but it just never happened. He kind of waited until the whole thing had kind of ran its course. It was very strange, and I'm still a little shocked, to be honest — a lot shocked, to be honest.

Antiquiet: I sat down with Nick in a bar, like last year when he was quitting [KYUSS LIVES!], and we talked about a lot of different things, and at the time, he said he felt the lawsuit was going to end friendships and ensure you guys were never going to play with Josh or Scott again. Now that it's behind you, how has the fallout been? Are the friendships fucked up?

Brant Bjork: Well, I mean, Josh and I haven't been friends for many years. There's been pockets of time where we've been amicable and we tried to deal with our differences and whatever. Over the years, I've reached out to try and just kind of smooth things out, and for whatever reason, he just has always continuously fallen into this like, disdain for me. I don't know what it is. It's no big deal to me, really. I don't really care. I don't need him as a friend, and Scott, I could say the same. I mean, there was a time I respected them as musicians. But after something like this, I don't have any respect for them. I think they're shallow people. I think they've got serious ego problems, and they're just all-around negative. This lawsuit affected me and my family, man, you know? I can't tolerate that on any level. Scott Reeder and Josh Homme are two people that I just don't recognize; I don't believe in them at all.

Read the entire interview at Antiquiet.