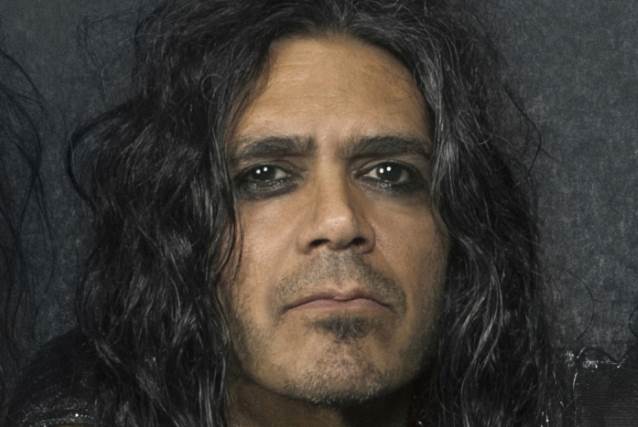 Former KING DIAMOND bassist Hal Patino suffered a "mild heart attack" over the weekend. The news was revealed by his son, Danish rock singer Maryann Cotton (born Jackie Patino), who recently embarked on a North American tour, with his father handling bass duties during the trek.

Said Maryann: "We are currently in Las Vegas headed to Canada. During our stay here, my father, Hal Patino, had a mild heart attack and has been hospitalized since Sunday July 1st at Desert Springs Hospital. He fainted during the day at around 1:30 p.m. When we admitted him to the hospital, he had a blood pressure of 236; normal being 120. Due to his high blood pressure, he will not be able to perform in Canada. We are not sure as of now if he will need surgery or not, but we are keeping a close eye on him and hopefully he will be back to play the rest of the tour. This is a tough time for everyone, especially me, but I am positive about his recovery."

Maryann continued: "We are working on getting a stand-in for the Canada shows, and due to this setback, we really hope to give the fans a decent show. Please keep my father in your prayers."

Patino played bass for KING DIAMOND from 1988 to 1990 and once again from 2001 to 2014, at which point he was fired from band and replaced with Pontus Egberg.

Back in July 2014, Patino released a statement calling KING DIAMOND's frontman and namesake "a tired, bitter, old man" and denying that he has a drug problem, despite the singer's implications to the contrary.

After King announced Hal's exit from KING DIAMOND, Patino posted a message of his own claiming that he was offered a "totally ridiculous" salary for the band's five shows that summer, calling the move "disrespectful" and insisting that he quit the band in disgust two days before King announced Patino was "relieved of his duties" as the bassist for KING DIAMOND. King then responded with a lengthy posting on his Facebook page, accusing Patino of "putting out extreme lies" about King's character and slamming Hal for asking for more money at the last minute after the rest of the band and the crew already accepted the same salary as they had received for the 2013 European tour.

Maryann Cotton's career was launched in 2006 when he performed live on Danish TV as part of the "Scenen Er Din" program (Danish version of "Star Search").