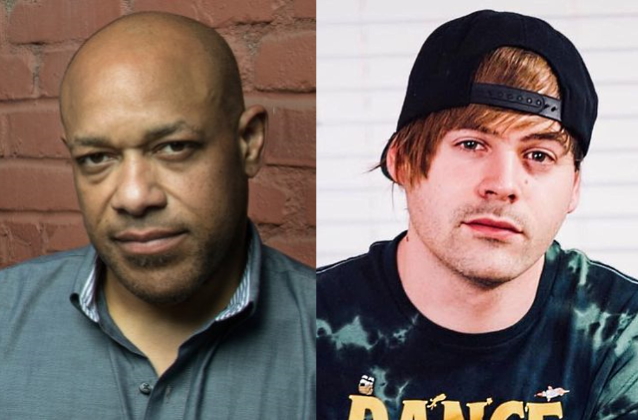 SION, the new project featuring former KILLSWITCH ENGAGE singer Howard Jones and modern guitar virtuoso/content creator Jared Dines, will release its debut single and accompanying music video, "The Blade", on March 11. A short teaser for the track is available below.

Speaking about how their collaboration came about, Dines told Rock Feed: "Way back [in] 2018 was the TRIVIUM tour that I filled in for that Howard was on with his band LIGHT THE TORCH. And, of course, we met and we talked and we just kind of randomly started talking [about working together]. I think Howard mentioned, 'Down the road, let's maybe talk about doing something.' And, of course, I was, like, 'Yeah, that sounds awesome.' So that's kind of where it started. And then maybe just until [early 2020], I think [he] reached out and had said that [he] had some free time, and I had some free time, so we figured why not start now and start writing some songs. So that's kind of how it started. It was just very casual, and it's just been that way — very natural, and not, like, [with] any type of real plan."

Regarding SION's musical direction, Dines said: "I think there's a lot of natural influence I have from bands like KILLSWITCH ENGAGE, AS I LAY DYING, et cetera, et cetera, because that's the era I grew up on, so that's kind of imprinted into my playing as it is. So it's very natural for me just to flow out these very, you could call it KILLSWITCH ENGAGE-sounding songs, but that's not the intent, what we were going for. But, yeah, they're going to sound, when you hear them, of course, because of Howard and because of my influence and my style, they will be similar to that sound — just naturally. [KILLSWITCH ENGAGE's third album, 2004's] 'The End Of Heartache', of course, for me, was my favorite and what influenced me the most, so I would say it's probably gonna sound more like that, as far as instrumentally. And whatever Howard wants to do with it, it's gonna sound like Howard. It's gonna sound like me and Howard, whatever that sounds like."

Jones left KILLSWITCH ENGAGE in 2012 and battled manic depression and bipolar disorder before forming a new project, DEVIL YOU KNOW, with guitarist Francesco Artusato (ALL SHALL PERISH) and drummer John Sankey (DEVOLVED). Along with bassist Ryan Wombacher (BLEEDING THROUGH), they recorded and toured behind two well-received albums, 2014's "The Beauty Of Destruction" and 2015's "They Bleed Red". In 2017, the band changed its name to LIGHT THE TORCH following a bitter dispute with Sankey, a part owner of the name.

Asked what made him get back into music after leaving KILLSWITCH ENGAGE, Howard told Heavy New York: "Honestly, I think it was because I was just kind of tired of doing nothing and I don't do much else other than music. I felt like I needed to venture out because I was basically agoraphobic for three years. It's kind of well known. I went off the grid. I didn't have a cell phone for three years — I was gone. It felt, like, 'Okay, maybe I should dip my toe in. I don't have to do it full time. I don't have to do what I don't want to do.' That's all I was thinking. I started moving, I started doing things. It was definitely a struggle, especially for the first few years. I was, like, 'What am I doing?' There's been few things in my life that has been consistent other than music. I just did it. It just took some time, then all of the sudden, the spark showed up. I fell back in love with what I was doing. I really can't explain it. It just sort of happened."

In a 2014 interview with Fishing World, Jones stated about his musical influences: "Well, just about anything I can listen to. AC/DC and KISS were the first bands that introduced me to heavy music. After that, I just absorbed anything I could get my hands on. Some favourites are FAITH NO MORE, HIM, ALICE IN CHAINS, PORTISHEAD ... My taste is kind of all over the place."

Dines has redefined the very idea of a guitar hero online. His YouTube channel boasts a staggering 2.92 million subscribers and more than 700 million views. He also has collaborated with everyone from Post Malone to BREAKING BENJAMIN. His recorded output includes "Rest", "Repose", "Daddy Rock" and "Dissimilator", to name a few. He made history as "the first YouTuber" to grace the cover of Guitar World magazine. Meanwhile, he teamed up with Music Man for a signature Stingray guitar.