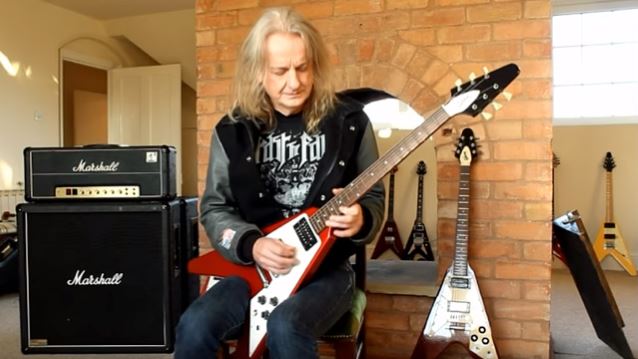 Former JUDAS PRIEST guitarist K.K. Downing has uploaded a five-minute video clip to his official YouTube channel in which he looks back at the band's classic "Sad Wings Of Destiny" album on the 40th anniversary of its release. Check it out below.

Downing recently said that he would be open to reuniting with his former bandmates on the occasion of a hypothetical Rock And Roll Hall Of Fame induction.

Downing, who is a founding member of the British heavy metal legends and was part of the group since 1969, announced his retirement from PRIEST in April 2011. He has since been replaced by Richie Faulkner, who was once the guitarist in the backing group for Lauren Harris, daughter of IRON MAIDEN bassist Steve Harris.

Asked by BlastEcho if he would be okay with performing with PRIEST again at the Rock Hall induction ceremony if they were to ever receive the honor, Downing said: "I'd be fine with anything like that." As for an official return to JUDAS PRIEST, Downing said: "Obviously, they have Richie there. MAIDEN has done the three-guitar player [thing], but I don't think there's room for an extra guitar player in PRIEST. PRIEST has always been a two-guitar band so I can't see that working. We'll have to see what happens next."

Downing went on to say that one way to guarantee his reunion with JUDAS PRIEST is to schedule a massive tour featuring of BLACK SABBATH, IRON MAIDEN and PRIEST. "It would be something I would have to be part of," he said. "Only because I'd like to see the greatest heavy-metal tour happen because it's never happened. And it's never gonna happen. Unfortunately, that chapter of history won't be there forever, which is kind of sad."

K.K. told the "Rockin' Metal Revival" Internet radio show last year that he was optimistic that PRIEST would one day get inducted into the Rock And Roll Hall Of Fame. He said: "Well, I certainly hope so. But everything comes to us in the end, I guess and hope. As hard workers and as prolific a band as we've been, producing material and tours for so long, it was… not as though we really, really care about winning Grammys, but lots of other bands do. We're thinking, 'Why do we get pushed to the back of the queue?' So I guess the Hall Of Fame, there's still a lot of fantastic bands that have still not been let into the Hall Of Fame, but I guess that everyone's turn will come."