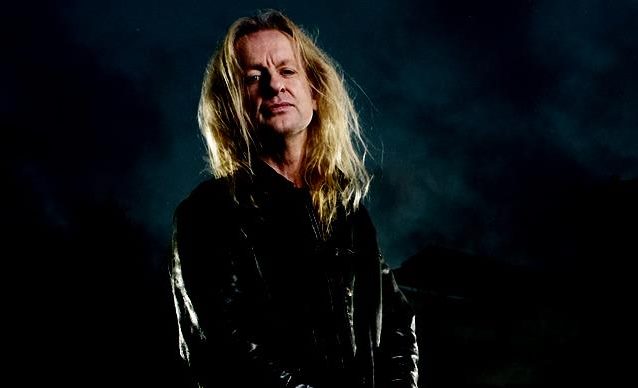 "Well, it's that time again! Another birthday comes around!

"All of you that were there with me in the late Sixties, Seventies and onwards will know what I mean.

"Isn't it crazy that Mick Jagger is 70, for example? And Jimi Hendrix would also have been 70 this year.

"Anyway, not to be too down about it, because at least we were there to witness everything that is relevant to the music that we know and love today.

"I always say that I couldn't have been born at a better time. I was just in my early teens when John Mayall, CREAM and all of the early blues artists were just coming to fruition along with THE [ROLLING] STONES, PRETTY THINGS, TROGGS and THE KINKS, etc.

"This was all back in the day when music was everything to us, and it was all we had and we were more than happy with just that. Although I can remember having an insatiable appetite that always wanted feeding, so I had to go to concerts and festivals as much as I could. That's because what I wanted was still scarce on radio and television.

"I seem to remember being 16 and there was only the late and great John Peel who played anything close to what we wanted to hear. Although John's taste was often a little too diverse for me, including, for example, T.REX, CAPTAIN BEEFHEART and the THIRD EAR BAND, John was still the greatest pioneer and champion of our cause at the time.

"Am I jogging some memories here?

"Again starving for the real thing, I was lucky enough to see two shows on this Jimi Hendrix tour, Coventry 19th of November and Bristol 24th of November 1967. Please check out the link and see if you recognise any of the amazing support acts. I can't remember which tour it was but can remember being ecstatic when I myself with PRIEST played these venues later on, especially following in Jimi's footsteps playing on stage right.

"Here is another great venue close to my heart: Newcastle City Hall — where PRIEST have played many times. I have only just found out that the tour went there. It is said and written that the great Lemmy himself was also working the tour as a roadie. I have hung out with Lemmy many times and never knew this; otherwise I would have wanted a gig by gig report off him.

"Anyway, my devoted friends, it is for sure that the Internet is our greatest friend and our worst enemy at the same time. But I am certainly grateful to the Internet today, in order to be able to bring this blog to you now.

"Please take care and please continue to feed the flames of metal."