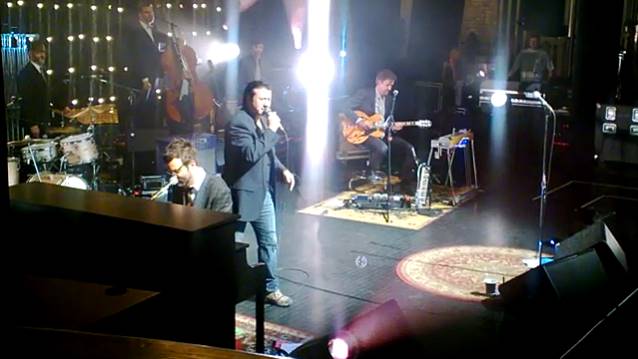 Former JOURNEY lead singer Steve Perry performed publicly for the first time since the '90s Sunday night (May 25) when he made a surprise appearance during alternative rock band EELS' concert at Fitzgerald Theater in Saint Paul, Minnesota. Fan-filmed video footage of their renditions of JOURNEY's hits "Open Arms" and "Lovin', Touchin', Squeezin'" can be seen below.

Perry left JOURNEY around 1986 and reunited with the band ten years later, recording the album "Trial By Fire", which reached No. 3 on the Billboard chart and was eventually certified platinum in the United States by the RIAA. But health problems soon sidelined the singer — a hip condition, which led to hip replacement surgery — and his bandmates decided to continue on without him. He's currently prepping his first solo album in 20 years.

Perry's only appearance with JOURNEY since his original departure from the band took place at a tribute concert to the late promoter Bill Graham in San Francisco on November 3, 1991.

In a recent interview, JOURNEY guitarist Neal Schon blamed the band's split with Perry on them growing apart, telling Classic Rock magazine: "Things happen along the way — women come and go. And things sometimes go sideways, which it did, and I was sorry to see that happen, but it did. It wasn't really a fault of anyone's. We all had a lot of different things to deal with: you're growing up, you're in a big band, and you're making lots of money. You're doing whatever you're doing and it's not helping the situation. It's hard to keep it all together. But things happen for a reason."

Schon also spoke fondly of his time with his former bandmate. "Steve and I had some really amazing times together," he said. "He was a very funny guy, and he liked to party with the best of us. In the beginning, when we wrote 'Lights' and 'Patiently', the first two songs we wrote together, we realized immediately that we had chemistry. And the guy was really funny to be around, so we hung out all the time. We were very tight and close for years and years."

JOURNEY's latest studio album, "Eclipse", featuring singer Arnel Pineda, was released in May 2011. The Walmart-exclusive CD debuted on The Billboard 200 album chart at No. 13.