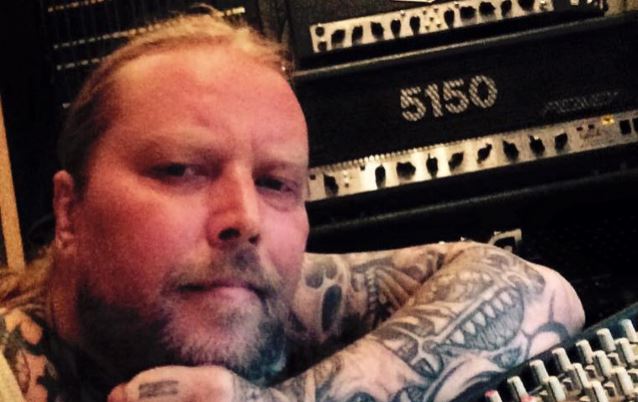 Former IN FLAMES and current THE RESISTANCE guitarist Jesper Strömblad has posted the following message on his Facebook page:

"Fans and friends, I decided it was time for me to write something about the current situation with me.

"As you noticed, I've been pretty inactive with the band and with updating my site, etc. Want to explain a little why.

"I am battling severe depression and anxiety problems, and have done for over 20 years now. My problem, at least 5/10 times, [has been] to take the easy way out. I've been drinking, and threw back what ever I get my hands on, just to numb my constant pain both in my broken soul and body.

"I'm on a great program now that will take me back to the person I once was, and [am] very positive about it, so don't doubt I will be back — obviously, with my family in THE RESISTANCE, finishing my solo album and other projects. But I have to get well first; that's my No. 1 priority. But I pick up the axe every day and I find it more and more exciting to play again!

"I want to give my apologies for people that came from far to see the real lineup with THE RESISTANCE this summer, and I haven't be able to do it. I'm really sorry about that. But be sure I [will] be back with a vengeance!

"I do everything in my power to get better. And I'm on the right path.

"See you on stage somewhere soon, and my soloalbum will be in [your] ears soon.

"This takes time, but I will FIGHT!

"I would be so glad if you have you guys behind me! Love ya all. May the force be with you!!!!!

"Love and respect to the death."

In an October 2014 statement on his Facebook page, Strömblad claimed that his alcohol addiction was only a "small" part of the reason he left the band and said that IN FLAMES' current musical direction did not match his original "vision" for the group. "All respect to IN FLAMES and their new approach, but, for me, the band was a guitar/riff-based melodeath band," he explained. "And it's not anymore, but still amazing musicianship and I don't think it's wrong. But it's not the vision I had when we started out. But still, all respect to them and the huge success; [it is] highly deserved!"

Asked to respond to Strömblad's comments, IN FLAMES guitarist Björn Gelotte told Germany's EMP Rock Invasion in November 2014: "Of course [alcohol addiction was] not the only reason that he quit. Of course not. It was several things, but it was a part of it.

"He's still one of my best friends, and I'll support him every day, all the time. If he needs anything, I'm there. But our schedules are so different now, so we rarely see each other. We almost need to do a tour together to hang out, and that's rarely happened. So touring was a part of what was tough for him. But yeah, he's free to say whatever he wants."

Regarding Strömblad's claim that IN FLAMES' current musical direction did not match Jesper's original "vision" for the group, Björn said: "Yeah, that could be one reason too [for his departure from the band]. But he was part of it all the way up until two records ago. So that's not the whole truth either."

Strömblad announced his departure from IN FLAMES in February 2010, explaining in a statement, "I'm determined to fight and defeat my demons once and for all." The remaining members of IN FLAMES added: "The door to IN FLAMES is always open to Jesper. We are, and will always be, behind Jesper 100% on his way to recovery."

Speaking about his current relationship with Strömblad, IN FLAMES singer Anders Fridén told Loaded Radio in a March 2015 interview: "I live in a different city, but I still love the guy. We didn't part ways because we were enemies; we parted ways because we couldn't work together anymore and didn't want to work together. And I know he's in contact with some of the other guys [in the band] here and there. So he's off doing his thing, and I hope he feels good about it. We're doing our thing and continuing being IN FLAMES."

Asked if he would have any problem with Jesper coming up on stage at an IN FLAMES show and jamming a song like "Leeches" with the current version of the band, Anders replied: "[That would be] no problem at all."