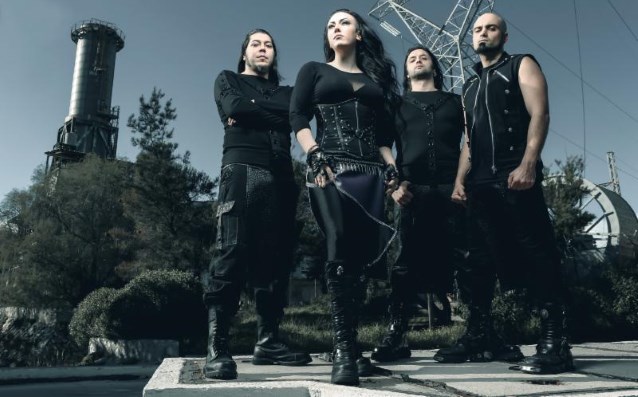 Greek outfit JADED STAR has signed a deal with American progressive metal label Sensory Records for the April 14 release of its debut album, "Memories From The Future".

After touring the world and captivating audiences along the way with their previous bands, JADED STAR was founded by Maxi Nil (ex-VISIONS OF ATLANTIS) and Raphael Saini (ex-ICED EARTH). Joining forces with Kosta Vreto (HORIZON'S END, WARDRUM) and Babis Nikou (ASTRAL DNA, OPENED PARADISE, DIA MAGEIAS), the band came into existence in 2013, instantly creating an arsenal of new tunes and beginning to tour that year.

Exploding with energy, "Memories From The Future" is now being readied for worldwide release after U.S. label Sensory Records brought the band into their family. Produced by Maxi Nil, mixed and mastered by Fredrik Nordström at the legendary Fredman Studios in Sweden, the album showcases Maxi's electrifying vocals and the masterful drum work Saini is known for. Guitar hero Kosta Vreto, with his unique finger strumming style, eschews the plectrum in favor of a raw, organic sound that literally comes straight through his hands. Babis Nikou on the bass brings a solid foundation and the chemistry between he and Maxi as the song writing team provides emotion to match the power of the sound.

Says Maxi Nil: "We can't put down in words how excited and happy we are for signing with Sensory Records, since it's very hard to find these days labels who truly help, support and believe in their bands.

"'Memories From The Future' is an album full of energy and emotions, and, personally, it's the best thing I've done so far. We're all very proud of it and we can't wait to share it with the world. Make sure to listen to it as loud as you can!"

Adds Sensory/The Laser's Edge owner Ken Golden, "Recently I was approached a new band called JADED STAR. As soon as I learned that Maxi Nil was the band's vocalist, I was immediately intrigued. I was quite familiar with her work with VISIONS OF ATLANTIS, so I knew this would be quality metal. When I heard the album, I was totally blown away."