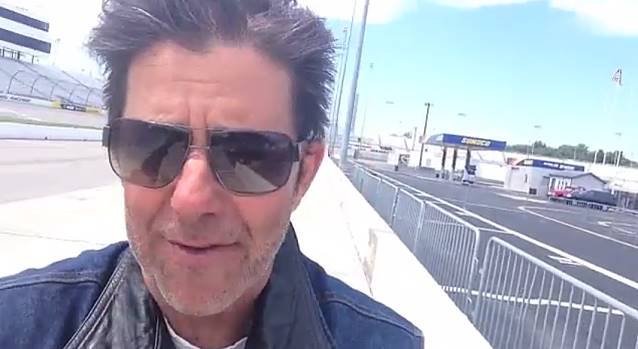 Rachtman, who currently hosts a NASCAR-themed radio show called "Racing Rocks" (heard on over 120 stations across America) and "Nascar 24/7 Live", wrote on his Facebook page this past Monday (January 13): "You may have heard that on my list of things to do in 2014 I was somehow going to do my version of the 'Headbangers Ball'.

"Why? Not for money not to get my face out there, not to rehash a part of my career that isn't there anymore. The only, and I mean only, reason I'm doing this is because I get asked all the time and because I think it will be a blast.

"I get very obsessed when I have an idea I am excited about and that is the case with 'Riki's Ball'.

"It would be great to say I'll make it a video show, but the truth is the music channels have no interest whatsoever.

"I'm hoping it will be a music show playing all types of metal, with the majority of it coming before 1995. The stuff we used to play on 'Headbangers Ball'.

"The big problem is, as with the original 'Headbangers Ball', you can not please everyone.

"Many will say it isn't heavy enough. Some might say I should play new unsigned bands. Others will want me to focus more on the glam side.

"If it was 100% the show I want to listen to, it would be a lot of heavy stuff, some punk, but then again, what the fuck, throw in a little Shooter Jennings, SUPERSUCKERS, but we all know it can't be like that.

"There are some newer bands I happen to like a lot: GOJIRA, EVERY TIME I DIE, LAMB OF GOD, SLIPKNOT. OK, some of those aren't that new, but it will be tough finding a home where I can play that as well.

"I'm looking at it more in the way of fun rock like we used to play.

This is my ideal playlist

"Are these my favorite songs? Nope, but I just thought it was upbeat enough to be fun. I only want to do something fun.

"Hey, hopefully someone will find a home for me to play with my 'Ball'."

From 1990 until 1995, Rachtman hosted "Headbangers Ball" (replacing Adam Curry). His friend at the time, Axl Rose of GUNS N' ROSES, reportedly was instrumental in him getting the job at MTV. Rachtman also had a brief appearance as a wedding guest in GUNS N' ROSES' music video "November Rain".

From August 1993 until April 1996, Rachtman was the co-host of the radio advice program "Loveline".