Shawn Tyler Chavez, the former lead guitarist of Denver, Colorado thrashers HAVOK, Shawn Tyler Chavez, has passed away at the age of 30. He was a member of HAVOK from 2004 to 2010. An official cause of death has not been revealed.

"It is with deep regret that I must inform fans, friends, and family of HAVOK that Shawn Tyler Chavez, the former lead guitarist of HAVOK, passed away on April 30th, 2015 in Las Vegas, Nevada. He was 30 years old.

"Shawn was the very first lead guitarist of HAVOK and helped forge the band's sound in the early years. Without Shawn's dedication during the first six years of the band, HAVOK would not be where it is today.

"Shawn entered HAVOK just in time for the band's first scheduled performance, a high school talent show. He was a founding member and gave the band its very first guitar solos and harmonies. He also contributed to many of the lyrics on the 'Burn' album. At one of the first meetings I had with him, I remember Shawn bringing a red Strat-style guitar into the rehearsal room with the word 'Shawnacaster' tagged onto the headstock in his swirly, graffiti-esque handwriting. Shawn used to wear a tie-dye shirt at least once a week and I will never forget the times we made tie-dye HAVOK shirts to fit his style.

"When he was being himself, Shawn was a riot. The guy was super funny and entertaining… He made me laugh a lot with his jokes, slang, witty comebacks, rhymes, and hilarious physical comedy accompanied by beat-boxing. I met Shawn when he was a 17 year old Jimmy Page lookalike, so it was quite interesting to see him grow from a shy young man into a flying V-weilding lead guitar player for a heavy metal band. He loved LED ZEPPELIN and could play just about any Page solo better than Page does on the records! He was an extremely talented blues player and it's obvious on songs like 'Path To Nowhere', 'Identity Theft', and 'To Hell'. Shawn was VERY smart and I learned a lot from him through our discussions about history, religion, politics, and music. Though we would argue at times, he was quick to let things go and move on with life. This is a quality I admired in him and I wish more people in the world possessed this quality. The usual icebreaker after an argument was a stupid joke that would make me laugh and ease any tension. People that knew him can remember his passion for meaningful debate and a desire to see ideas evolve to their best conclusions. The world would benefit from having more intelligent, funny, charming, kind, thought-provoking individuals like 'Shawnathan'.

"I would like to wish condolences to his family and those close to him. Shawn was a gentle, likable, sensitive, and well-spoken individual. He was one of my best friends during adolescence and he taught me a lot about an array of topics. It is sad to see him pass at such a young age. Shawn's contributions can be heard throughout the first HAVOK full-length album, 'Burn' and various other early recordings.

Shawn Tyler Chavez is pictured all the way left in photo below. 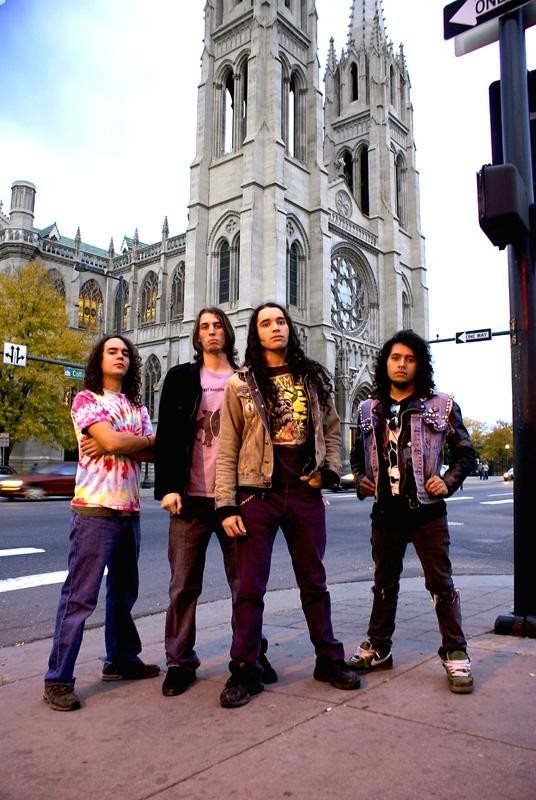