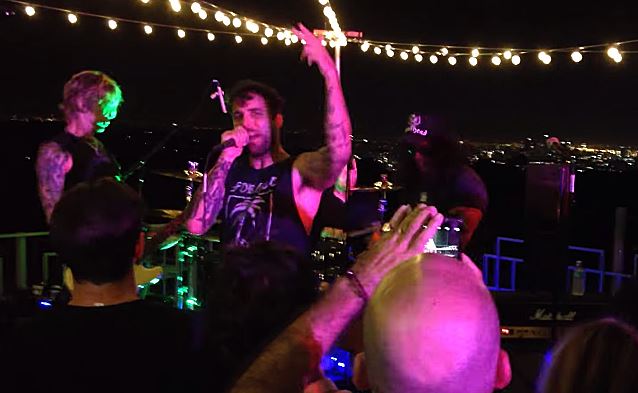 Founding GUNS N' ROSES members Slash and Duff McKagan reunited this past Saturday (September 12) to perform at a benefit event for the Wonderland Avenue School in Los Angeles, California. They were joined by their VELVET REVOLVER bandmate Dave Kushner, APOCALYPTICA singer Franky Perez and drummer Bill Burr for a cover version of AC/DC's "Highway To Hell". Check out fan-filmed video footage below.

Founded in 1927, Wonderland is a public kindergarten through fifth grade campus nestled in the Hollywood Hills above Los Angeles.

Slash recently revealed that he and GUNS N' ROSES lead singer Axl Rose had repaired their estranged relationship after nearly 20 years, immediately leading to a storm of speculation about a possible reunion of the classic GUNS lineup.

VELVET REVOLVER has never found a new singer following its April 2008 split with Scott Weiland and is more or less on hiatus, although it reunited with the former STONE TEMPLE PILOTS frontman for a short one-off performance at a benefit concert in January 2012.