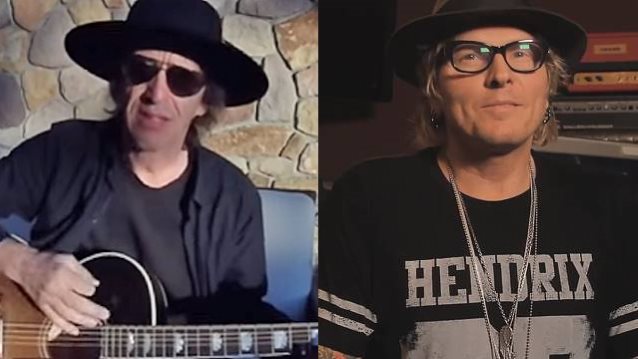 Former GUNS N' ROSES drummer Matt Sorum has laid down the drum tracks on a new song from ex-GUNS N' ROSES guitarist Izzy Stradlin. The track, titled "F.P. Money", will be released next month. It was recorded and mixed by J.T. Longoria at Brotheryn Studios and it features Sorum on drums, Damon Fox on keyboards, Tony Babylon on bass, Rick Richards on lead guitar and Stradlin on guitar and vocals.

Said Stradlin: "Matt Sorum and I crossed paths earlier this year and both agreed it might be fun to one day throw down a new track and see what we get."

Sorum added: "Izzy Stradlin and I have collaborated on a new song he wrote called 'F.P. Money', out in July everywhere. It was great to reconnect again and make some rock 'n' roll with this great singer, songwriter guitarist and all-around cool dude. Music for music's sake, it was really organic and fun. Hope you take a listen. And turn it up!"

Only Rose, Slash and McKagan from GN'R's "Appetite For Destruction"-era lineup took part in the first nine GUNS N' ROSES comeback shows in April and late June. They were joined by drummer Frank Ferrer, keyboardist Dizzy Reed and guitarist Richard Fortus. Also appearing with them was second keyboardist Melissa Reese.