Powerhouse vocalist and songwriter Lou Gramm can be heard each and every day, all over the world, on radio, iPods, CD players, television commercials, music videos, and of course... jukeboxes. Gramm — the former lead vocalist and co-writer of the multi-platinum band FOREIGNER — has become the voice of a generation. Among the most distinctive and powerful voices to emerge from rock and Top 40 radio, Lou Gramm is also a successful solo artist in his own right and remains one of the most recognizable performers in music today.

Lou Gramm, the vocalist on 20 Top 40 singles, which continue to drive sales of nearly 80 million albums worldwide, exploded onto the international music scene with FOREIGNER on the chart-topper "Feels Like The First Time" in 1977. The stats are impressive: eight Top 5 singles on the Billboard Hot 100 chart and five Top 5 albums on the Billboard album chart in the U.S. alone plus a solid history of chart entries in several European territories and Japan.

Now, nearly three decades after the debut of FOREIGNER and chart-topping success as a solo artist, Lou Gramm returns with "The Lou Gramm Band", a powerful new CD featuring his own unique brand of rock 'n' roll.

"The feeling is wonderful and liberating, to be able to once again record an album of songs that I really care about, with my brothers and my friends making up the band," says Lou. The band is formed by Gramm's brothers Ben and Richard on drums and bass, respectively, with Andy Knoll on keyboards and Don Mancuso on guitars.

"I've always tried to be down to earth lyrically and write songs through experience and with emotion," continues Lou. "Musically, I am really fortunate enough to have creative and expressive musicians around me. When I hear a guitar or keyboard riff from my brother Richard, Don or Andy, a story begins to form lyrically and melodically and the band and I work these ideas. Sometimes very painstakingly, until we have the bare bones of something that we can be proud of."

Whether they are rocking out on classics like "Hot Blooded" or "Jukebox Hero", rolling out a new extended groove on Gramm's massive solo hit "Midnight Blue", or bringing to life "So Great" and "Baptized By Fire" from their new self-titled CD, Lou and his band have been pleasing enthusiastic audiences with a show that captures the essence of Gramm's talent.

"We would love to tour Europe and the rest of the world playing both new songs and select songs from my thirty-year career," says Lou. 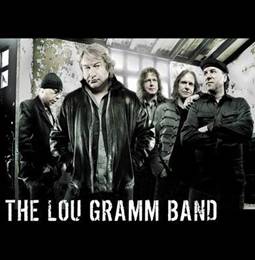