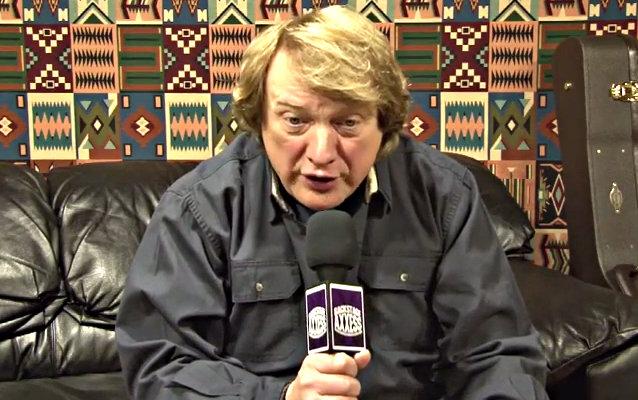 BackstageAxxess.com recently conducted an interview with former FOREIGNER singer Lou Gramm at House Of Guitars in Rochester, New York. You can now watch the chat below.

Released on May 1, 2013 through Triumph Books, "Juke Box Hero: My Five Decades In Rock 'N' Roll" details Gramm's rise from humble, working-class roots in Rochester, New York to become one of rock 'n' roll's most distinctive and popular voices.

Throughout "Juke Box Hero: My Five Decades In Rock 'N' Roll", Gramm poignantly recounts how he realized his dream. Sadly, though, like many of his contemporaries, the singer would succumb to the trappings of wealth and fame. FOREIGNER's remarkable success was due in large part to the songwriting synergy between Gramm and the band's founder, Mick Jones. However, creative clashes between the two would become more frequent and the tension would result in Gramm's departure, not once but twice, the second time for good.

But the singer's recounting of his life is also is a story of redemption. In the early 1990s, he finally confronted his demons and checked into a drug rehabilitation center for a month. He came out a changed man and has remained sober ever since.

Several years later, Gramm faced an even bigger challenge when diagnosed with an egg-sized brain tumor. After being given a death sentence by several physicians, he learned of a then-revolutionary laser surgery being done by a doctor in Boston. Gramm underwent a life-saving operation to remove the tumor and then courageously battled through radiation treatments and several harrowing years of rehab.

Other "Juke Box Hero: My Five Decades In Rock 'N' Roll" highlights include:

* Gramm's difficult, courageous comeback from brain surgery. Just several months after his operation, he was contractually required to tour with FOREIGNER and dealt with memory problems that forced him to keep written lyrics at his feet — lyrics from songs he had helped write and had sung thousands of times before.
* The musical influence of Gramm's father, a trumpeter who ran a big band, and his mother, who was a vocalist in the band.
* How much the music industry has changed and how difficult it is for heritage rockers to get their new material out there.
* Working with best-selling author Scott Pitoniak (nationally honored newspaper columnist and author of 16 books), Gramm recounts his extraordinary life in this compelling and candid behind-the-scenes memoir.

"Juke Box Hero: My Five Decades In Rock 'N' Roll" is available at www.triumphbooks.com and wherever books are sold.