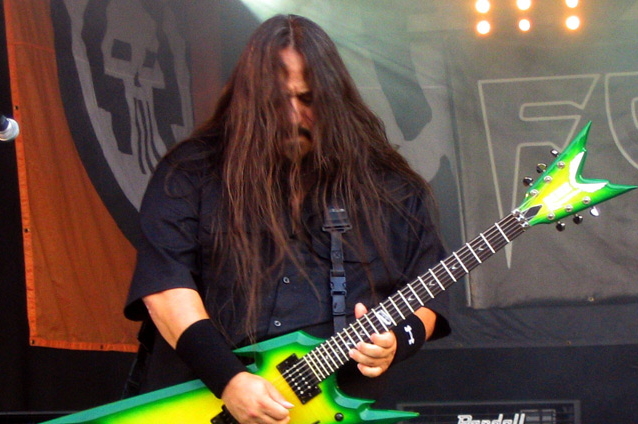 Former FORBIDDEN and TESTAMENT guitarist Glen Alvelais has released his first solo single called "Slow Down". The song was recorded at Glen's home studio and all his tracks were mixed by Eric Hill at The Blue Room Recording Studio and mastered by Maor Applebaum.

Says Glen: "I have about nine [or] 10 songs that I will be releasing for free and the plan is to do one heavier song for the thrash metal fans every other month and a Joe Satriani/Allan Holdsworth rock/jazz style in between. So stay tuned for about nine to 10 singles, and towards the end, I plan to package all the songs up and include the new unheard songs along with a full CD packaging of artwork by the one and only Travis Smith.

"I've written and recorded so many songs and ideas and just never got around to recording them properly because of working with my other band projects but I am now able to track at my own time and send off the music to be mixed and mastered. So stay tuned as I'm prepping music from BIZARRO, DAMAGE, HATEFX and LD/50. I am still taking on recording guest solos as well as doing my own. In the past, I had the honors of recording solos for bands like WAR CURSE, EVERSIN, KLANK, MOCCASIN CREEK, LIPSHOK and MOSHPIT JUSTICE and EARTH CRAWLER, and I absolutely love diving into new music, so keep the music coming.

"As well as releasing singles and recording, I am getting ready to start doing videos for my YouTube channel that is just getting started. In the past, I've been asked from fans to do videos of me playing various songs and solos, and with technology getting better and easier, I am taking on the challenge. Who knows — maybe even some online guitar lessons."

Alvelais is one of the original guitarists of the san Francisco Bay Area thrash band FORBIDDEN. Glen recorded on the band's debut album, "Forbidden Evil" and "Raw Evil: Live At The Dynamo". In 1992, Glen was recruited as the lead guitarist of TESTAMENT to replace Alex Skolnick. He recorded on "Return To The Apocalyptic City" and "Demonic".