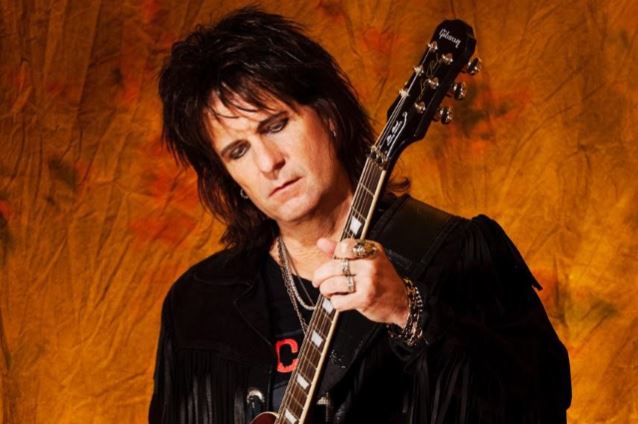 Frontiers Music Srl has announced the signing of former EUROPE guitarist Kee Marcello. A new studio album will be released in the fall.

Marcello is best known for his time as the guitar player in the band EUROPE from 1986 to 1992 on such milestone albums as "Out Of This World" and "Prisoners In Paradise". With this new album, Kee intends to go back to the sound that helped him make his mark. Expect some amazing arena rock songs, which he started working on at the end of 2015.

Kee says: "I'm really excited about this album. I'm making a new departure from the 'Le Baron Boys' era [EUROPE demo sessions recorded between 1989 and 1990], bringing it into the future.

"I've always felt that there was something magic about the material that Sony mysteriously refused to release on 'Prisoners In Paradise', and now the time has come to put things right. It's time to complete my unfinished symphony.'

"This is the album that EUROPE never managed to record after 'Prisoners In Paradise'. The songs will have a very familiar ring for everyone who loves that era. And as a homage to all the faithful fans I've recorded two previously unreleased 'Le Baron Boys' tracks on the album.

"With one foot in the past and one in the present I think this album will raise a lot of eyebrows — not to mention HORNS!"

Kee is making plans for a full European tour in support of the new release.

Marcello released his controversial autobiography, "The Rock Star God Forgot", in Sweden in October 2011. He also made headlines in the biggest Swedish newspaper with a painfully honest interview about the memoir, which was said at the time to be "the first sex, drugs and rock and roll book ever written by a Swede."