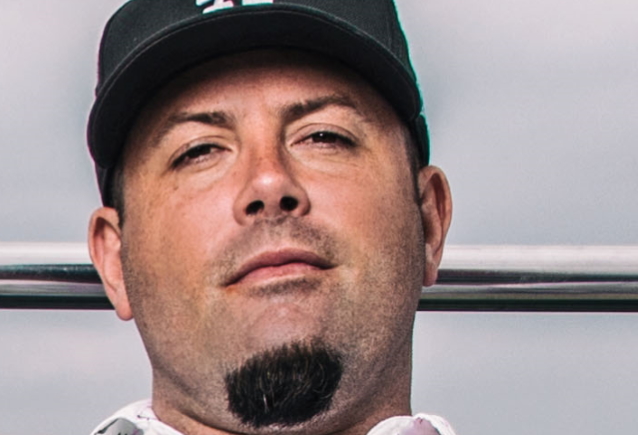 Speaking about DEVILDRIVER's 2011 European tour with MACHINE HEAD during which he constantly butted heads with Fafara, Boecklin told Flynn (see video below): "I remember it completely, this turmoil every day. I remember I sat you down after the last show in Manchester, and I was kind of, like, 'I need help. I'm not happy.' And you were, like, 'Have you considered therapy with [Dez]?' And I was, like, 'No.' I'd done enough therapy on my own, and it felt exhausting. But that was the beginning of me deciding to leave the band, for sure.

"That guy just wanted to pick a fight [with me]," the drummer continued. "I don't wanna say he's the worst guy on the planet, but he just didn't like me and I didn't like him and it just was not working. And anything I did, he seemed to just try and destroy it. And I felt like I'm the main contributor in the band. I wanted to be a partner, and he was, like, 'Hell no.' There was no transparency with money. And he's building a pool, buying a house, and I'm, like, 'Can I pay my rent this month?' Things were just very uneven. Is that justified on his part? I don't think I'd be anywhere without that guy; he changed my life. But after 12 or 13 years — money gets in the way, man; it does. It sucks."

Asked if he was just a "hired gun" in DEVILDRIVER, John said: "Technically, yeah. The whole time, yeah. But when you're recording most of the guitars, bass, drums, writing, it just never really felt right. But once you're in a position, it's hard to step down and give someone else more power. And he was always scared to kick me out 'cause he thought the band would lose its integrity. And I was scared to quit because I'm, like, 'This is the best ride I can probably be on. It probably won't get any better.' I eventually just stepped off, though."

According to Boecklin, he's had an "on-and-off relationship" with Fafara for years. "He's not the easiest guy," John said. "But I think we're at a peaceful place right now at least. His wife came down with some cancer stuff, and I was, like, 'Fuck everything.' It took me a while, but I reached out, and it felt good to just be at peace with him.

"The first [interview] he did with Revolver [magazine after my departure from DEVILDRIVER], I quit, but Revolver says, 'When did you know Boecklin had to be kicked out?' And he said I was a closet alcoholic, I was into drugs — it was just all lies. And I was just, like, 'Fuck this.' … So I felt like being stabbed in the back. And then I ran into him at the Whisky [A Go Go in Hollywood, California] at a SUPERJOINT show, and he was very nice. But then everyone told me as soon as I left, he just talked a lot of shit about me.

"He's a tough one to talk about, but I think at the bottom of his heart, he means well and he's a nice guy."

BAD WOLVES released its sophomore album, titled "N.A.T.I.O.N.", last October. The band broke through in 2018 with a cover of THE CRANBERRIES hit "Zombie". CRANBERRIES vocalist Dolores O'Riordan was supposed to contribute to the track but died the day she was supposed to go into the studio.