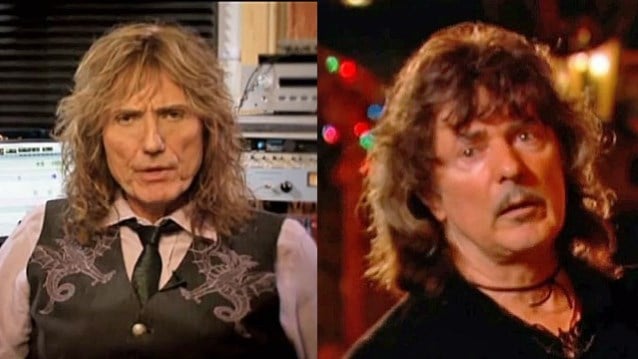 WHITESNAKE mainman David Coverdale has revealed to Classic Rock magazine that he and his former DEEP PURPLE bandmate Ritchie Blackmore discussed the possibility of working together again after the death of the band's keyboardist, Jon Lord, in 2012.

"The tragic loss of Jon made me finally realize that life is too fucking short to hold animosity, bitterness and resentments," the singer told the magazine. "So I decided to reach out to Ritchie to share the sense of grief and loss of Jon with him, and to express my gratitude to him for bringing me on board DEEP PURPLE. During the conversation, we did discuss the idea of getting back together in some way, which was Jon's wish."

According to Coverdale, nothing came of the idea because "after several discussions with Ritchie's manager, I felt I didn’t share their vision of the project. I sincerely wished them well and respectfully withdrew."

But, Coverdale added, "During this time, I pulled out the albums and started messing around with some of the songs — rearranging ideas, adding a new bit here and there.

"The bonus, for me, was I rediscovered my love for that time and the work all of us achieved together. Magical times."

WHITESNAKE's 12th studio album, "The Purple Album", will be released in Europe on May 15 and in North America on May 19 via Frontiers Music SRL. "The Purple Album" is a re-imagination of classic songs from Coverdale's time as the lead singer for DEEP PURPLE's Mark 3 and Mark 4 studio LPs.