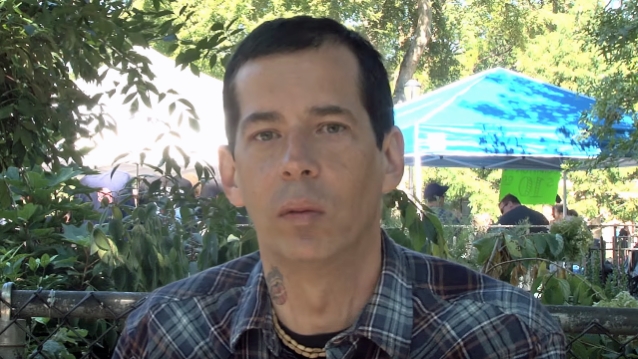 Todd "Youth" Schofield (born 1971), the American guitarist best known for his work with WARZONE, MURPHY'S LAW and DANZIG, has died at the age of 47.

Schofield's passing was confirmed by his FIREBURN bandmate Israel Joseph I, whom many may remember as the vocalist on the 1993 BAD BRAINS album "Rise".

In a post on his personal Facebook page, Israel wrote about his late friend, in part: "There are no words to express how sad I am at the passing of my brother Todd Youth. The music he made will forever be remembered, and I'm so thankful that I was able to work with him and that we created FIREBURN together.

"Todd and I were living separate lives doing hardcore and reggae music. We met each other in 1992 and then never spoke again until 2017. We created FIREBURN within two weeks of knowing each other and finished writing two of my favorite hardcore records that I ever worked on: 'Don't Stop The Youth', and 'Shine'. Closed Casket Records signed the band and we were on our way.

"We had great shows and lots of people showed up to them. We toured with GBH from England, hung out with the guys from NEGATIVE APPROACH, and got our blessings about our music and our records from the BAD BRAINS.

"I know that Todd is now resting in peace and I know that Krishna has taken his soul to a better place. He was a devout Hare Krishna and a devout human being.

"Todd, wherever you are, I hope that we will make music again one day. Life is a circle, and I know I'll meet you again in that circle brother. We will meet again. Rest in peace, rest in power, rest my brother."

Youth was a member of DANZIG from 1999 to 2003 and then again in 2007. He played on the "Danzig 777: I Luciferi" album, which came out in 2002. He told No Echo about the disc: "I wanted to make that shit sound like DANZIG, and I think we did that. In my opinion, it's the closest he's gotten to classic DANZIG since the original band. I think it's a good record. The production was good. I brought the engineer in to the album, who ended up being Nick Raskulinecz, a guy that has gone on to do stuff like RUSH and FOO FIGHTERS. He was just starting out at that time."

Back in 2003, Youth had a brief stint as the fill-in guitarist for MOTÖRHEAD at several dates on the band's U.S. tour after regular guitarist Philip Campbell's mother passed away. Todd told No Echo how he ended up getting the gig. "I had become really close with the guys in MOTÖRHEAD because we would always rehearse next to each other," he said. "There were times when Phil wouldn't be there, so they would invite me to jam with them. One time, Phil tells me, 'Can you come play bass? Lemmy is at the dentist and he hasn't been at a dentist since 1967!' So I got to play Lem's bass. So, they knew I knew all of their songs. 'Fast' Eddie [Clarke] was a huge influence for me. When you listen to my soloing, it's 'Fast' Eddie. Okay, so it's a Friday morning and I get a call from Todd Singerman, MOTÖRHEAD's manager, and he tells me that Phil Campbell's mother had died and he had to go back to Wales for the funeral. They had some shows still booked, so he asked me if I would be able to finish the tour with them."

Adding that he was a big MOTÖRHEAD fan growing up, Youth said: "I remember lying back with headphones on when I was kid, listening to 'No Sleep 'Til Hammersmith', staring at that cover with the Marshall stacks and the lights for fucking hours! It was like, 'This is what I want!' I'll give Harley Flanagan credit for turning me on to MOTÖRHEAD and teaching me that Lemmy kind of bounce on bass. It was very rythmic and percussive. But I got the call on a Friday and I figured I'd have till the week after to learn the setlist, but Todd goes, 'I need you on a plane on Sunday morning at 6 a.m. You have to do your first show that night.' [Laughs] It was crazy, but I sat in front of my computer for hours that weekend learning the songs. I remember getting to the venue and saying hi to everyone. Lemmy then asks, 'What two songs do you need the most work on?' So I tell him and we run through the songs and then he goes, 'You're fine,' and then walks off the stage! [Laughs] But you know what, I ended up killing it and the fans were great.

"My last show with MOTÖRHEAD was at the Stone Pony in Jersey and Jimmy from MURPHY'S LAW and all these other [new York hardcore] people were there but they had no idea that I was playing in the band! Jimmy was like, 'I couldn't fucking believe it! I looked up and it was Todd Youth playing guitar with MOTÖRHEAD!' [Laughs] Anyway, that ended up being a huge highlight in my career, or whatever you want to call it. If it all ends right now, I played in MOTÖRHEAD, know what I mean?"

Posted by Ras Israel Joseph Makonnen I on Saturday, October 27, 2018

TODD YOUTH
REST IN PEACE MY BROTHA!!!
I AM SO UPSET RIGHT NOW CAUSE YOU WERE LIVING YOUR LIFE & YOU WERE DOING YOUR THANG.
YOU ALWAYS SHOWED ME LOVE ESPECIALLY WHEN I WAS COMING UP IN THIS… https://t.co/eqIPbgGKPd

Ah fuck, I just heard the news about Todd Youth. Way too young to go. RIP :(

Sad to hear of the passing of Todd Youth. Worked with him in Bloodclot and he was a member of tons of influential bands

RIP Todd Youth. We played together in my solo band for one show in Northern California in the Redwoods a couple years ago. Very sad for your family and friends. thanks for the music Todd https://t.co/nAQL9bsbAI

Very sorry to hear of the passing of Todd Youth. Never met the man but always respected his work. #RIPToddYouth pic.twitter.com/xtBUY9i56p

So sad to hear about the passing of Todd Youth.. rest easy brother x

Today is a extremely sad day for the NYHC Scene. Our friend, brother and early member of Agnostic Front Todd Youth has passed. This is a very hard time for his immediate family and… https://t.co/Ad8A7lo4cC

Gutted to hear about the loss of another NYHC family member! Neighbors in Parkslope & met when I was a kid during rocky times, been friends for a long time. Hung at @punkrockbowling a few months back & chewed it up, I hope you found peace brother @ToddYouth pic.twitter.com/9ZVqyWcSJC

First hardcore band I ever got into, & first hardcore show I ever went to was Murphy’s Law. Had the pleasure of sitting next to toddyouth at the screening of thegodfathersofhardcoremovie… https://t.co/zspTMY51OC