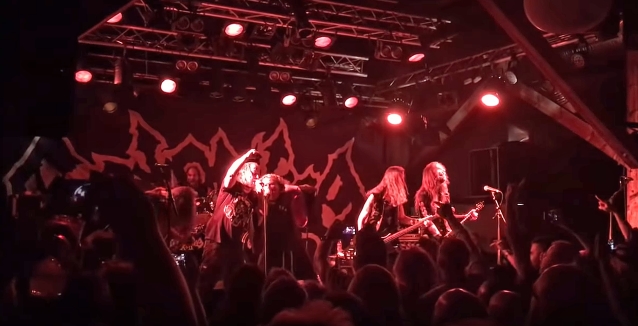 Former CANDLEMASS singer Messiah Marcolin joined ENTOMBED A.D. on stage on September 22 at Katalin in Uppsala, Sweden to perform a cover version of ROKY ERICKSON AND THE ALIENS' "Night Of The Vampire". Fan-filmed video footage of his appearance can be seen below.

ENTOMBED A.D. recently returned with a new single, "Fit For A King". The song is taken from the band's forthcoming third album, which is currently in the works.

Marcolin joined CANDLEMASS in 1986 as replacement for Johan Längqvist, who sang on the band's debut album, "Epicus Doomicus Metallicus". Messiah made his debut with CANDLEMASS on the group's second LP, 1987's "Nightfall", and stayed on for two subsequent albums, 1988's "Ancient Dreams" and 1989's "Tales Of Creation". Due to personal differences with some of the other members, Marcolin left CANDLEMASS during the "Tales Of Creation" tour.

The "Nightfall"-era lineup of CANDLEMASS reformed in 2002 and played various festivals and gigs. CANDLEMASS released recordings from its live activity during this period as "Doomed For Live" and issued a compilation, "Essential Doom", which included a demo version of "Witches", a song that would later be included on CANDLEMASS's self-titled 2005 album. CANDLEMASS announced in October 2006 that Messiah had left the band once again.