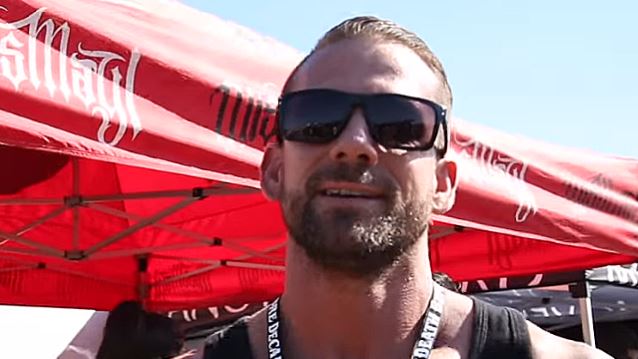 Former BLEEDING THROUGH frontman Brandan Schieppati has launched a new solo project called THE IRON SON. Schieppati collaborated on the effort with friend and producer Mick Kenney of ANAAL NATHRAKH and was assisted in the studio by drummer Shannon Lucas (ex-THE BLACK DAHLIA MURDER, ALL THAT REMAINS).

THE IRON SON's first single, "Unleash Hell", features a guest appearance by MOTIONLESS IN WHITE singer Chris Motionless and can be streamed below. The track is taken from THE IRON SON's debut CD titled "Enemy", which will be released later this month via Pvre Evil Records, a new label partly owned by Schieppati.

Said Schieppati: "After a short layoff from the music industry, I decided to work on this band with friend and producer Mick Kenney to create this music.

"This band is a solo band but I will be having a solid lineup that will play shows with me.

"This is a total DIY project. Although I received a bunch of record label offers for this project, I decided to self-fund the band as well as being a part owner in the record label Pvre Evil Records along with [longtime friend] C.J. Ray.

"I put my heart into this and the lyrics are straight to the point. It is a reflection on the darkest years of my life and recovery from addiction and mental illness."

Since the launch of his career in the late '90s, Brandan has truly starved and fought for his music to be heard. Despite the genuineness of his endeavors, Schieppati's reality was filled with day-to-day struggles, both financially and mentally, while others prospered off BLEEDING THROUGH's success. Adding insult to injury, these "persons" made little to no contribution. In order to stay the course with what he loved so much, Brandan was forced to hide the fact that he struggled with bipolar mood disorder. The progression of his diagnosis came to a head and practically drove him to deepest depths of inner despair.

In 2011, Brandan opened his first gym called Rise Above Fitness in Huntington Beach, California. Since fitness is his second love, this new career allowed Brandan to move his attention and focus away from the music industry, resulting in much-needed rest and self-reflection. During this period of removal, Brandan's fire for writing and playing music was always burning.

In order to quench his thirst for expression, THE IRON SON has materialized out of his refreshed passion and sharpened view of the world. To bring this new sound to fruition, Schieppati teamed up with longtime friend and producer Mick Kenney of ANAAL NATHRAKH to create a sound that encapsulates his refreshed vision. THE IRON SON has also provided for an opportunity for Schieppati to have old friends and few of his favorite musicians contribute, further diversifying the sound.

Having seen countless acts of ugliness in the music industry and in his personal life, Schieppati's lyrics come from a place most of us cannot vocalize. The passion behind his voice is driven by a need of redemption while exposing truth.

In an effort to ensure that THE IRON SON is uninhibited, Schieppati, along with Kenny and other longtime friend C.J. Ray, created Pvre Evil Records to support and build off this foundation and approach. The result is the undeniable fact that Brandan Schieppati is back doing what he does best, spitting venom through his lyrics and making the most heartfelt pissed-off music he can.