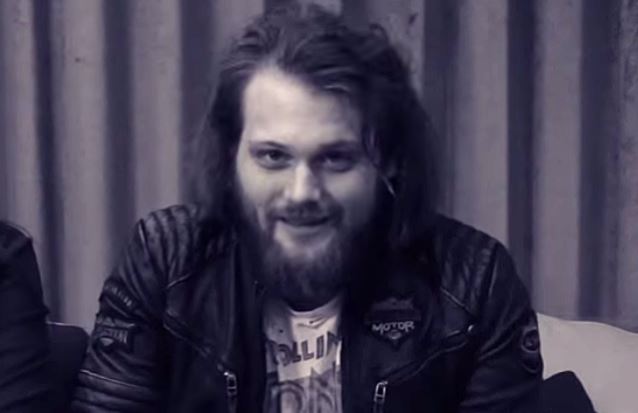 According to The Pulse Of Radio, WE ARE HARLOT and former ASKING ALEXANDRIA frontman Danny Worsnop is now adding "actor" to his resume. Worsnop recently landed a role in the horror musical "Allelujah! The Devil's Carnival", the second film in the "Devil's Carnival" series. Worsnop told Alternative Press that his involvement began when he was invited to the first film's Los Angeles premiere by director Darren Lynn Bousman and screenwriter Terrance Zdunich.

Worsnop explained: "After the movie, we were talking, and they were like, 'We'd really like you to do the second one.' I was instantly very excited [but] by the time it got to figuring out when shooting times were, I was on tour. So we had to cancel it. And then, when I had a tour canceled last minute, I hit them up. So Terrance scrambled and wrote me into the script real quick."

Worsnop plays a character in the film known as "The Smith," saying: "He believes himself to be a lot smarter than the other minions of Hell, and he's very unimpressed by what they think are genius and foolproof plans and ideas. He sees through it all."

Worsnop has one previous film credit to his name, in a movie called "What Now". Worsnop told us about the experience: "It's a comedy, I wasn't in it for very long, but I can divulge that I was having a sex act performed on me in the part I was in, which I have deemed very appropriate. And I'm not quite sure the solidarity of my performance, as I was highly intoxicated when I showed up."

The singer says he "fell in love" with acting and secured a manager and agent after making "Allelujah!" so he could pursue more work in the field. He said: "The Rock is remaking 'Baywatch', I'd love to get a part in that."

Worsnop is currently working on his first solo album, which he says will lean in a country music direction.

Worsnop parted ways with ASKING ALEXANDRIA earlier this year. His last album with the band, "From Death To Destiny", featured the Top 10 rock radio hit "Moving On".

WE ARE HARLOT released its self-titled debut earlier this year and earned rock radio airplay with "Someday" and "Dancing On Nails".