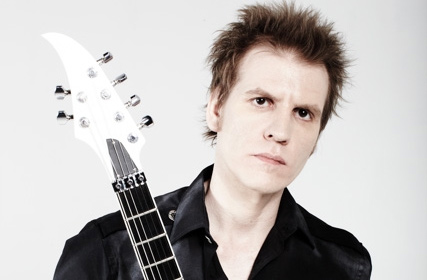 Guitarist Christopher Amott (ARMAGEDDON, ex-ARCH ENEMY) is no longer involved with GHOST SHIP OCTAVIUS, the new band featuring Matt Wicklund (guitar; GOD FORBID, ex-HIMSA, WARREL DANE) and Van Williams (drums; ASHES OF ARES, PURE SWEET HELL, ex-NEVERMORE). Amott says: "I'm focusing entirely on a new ARMAGEDDON album. We are in rehearsals at the moment. There's a lot of news to be announced, new members and so forth. We have almost completed writing the album."

GHOST SHIP OCTAVIUS' vocals are performed by 17-year-old Adon Fanion, whose style, character and lyrics are said to "extend far beyond his years."

GHOST SHIP OCTAVIUS is seeking a suitable record company to release the band's debut album, for which 13 songs have already been written, including "Released", "Alive", "Successor", "Find The Light" and "Caged Love".

Amott, who currently resides in the U.S., after marrying an American woman, previously said about the upcoming ARMAGEDDON album: "This one's gonna be 100% metal with loads of shred-guitar and intricate compositions."

Christopher Amott played a solo concert at the Loud Park festival on October 27 at Saitama Super Arena, a multi-purpose indoor arena located in Saitama City, Japan. Backing him at the gig were Wicklund and Williams.

Amott's latest solo album, "Impulses", can be purchased directly from his music store.

Christopher Amott started his career in music in 1995 as a founding creative force and guitarist in ARCH ENEMY. In this context, he is known for his tastefully technical guitar work and memorably emotive playing style.

After garnering his early success, Christopher had the desire to express himself on a personal level in the same genre. At this time he began writing albums under the name ARMAGEDDON. Christopher wrote and recorded three albums over the next few years as ARCH ENEMY grew into an internationally recognized act, with his compositions featuring his own vocal stylings on the last album. This would be Christopher's first foray into singing and a spark of inspiration for his later musical ventures.

In 2008, Christopher began to consider his creative options as a mature musician. He began writing songs of an entirely different atmosphere, which saw his guitar playing focused less on technical ecstasy and more on a chord-based blues rock ambience as a foundation for more prominent vocal and lyrical ideas. These compositions developed into his next solo project; the album would be called "Follow Your Heart", released under his own name in 2010.