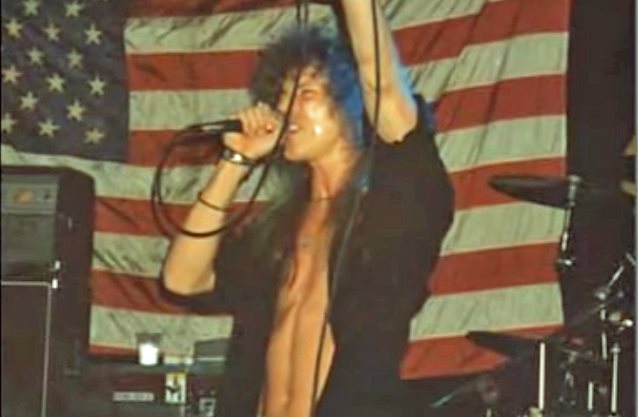 In a brand new interview with Sleaze Roxx, former SKID ROW and ANTHRAX singer Matt Fallon spoke about his brief stint as the frontman of the latter band prior to the recording of the group's "Spreading The Disease" album.

Asked how he ended up joining ANTHRAX and how his time in the band was, Fallon said: "Back in the early '80s, METALLICA were doing some promo appearances prior to the release of their first album, [which was originally supposed to be called 'Metal Up Your Ass' [eventually retitled 'Kill 'Em All']. At the time, I was playing with Dave Sabo [future SKID ROW guitarist] in a cover band called STEEL FORTUNE and we had a strong local following so we were asked to open for METALLICA at their last show. ANTHRAX was also on the bill and that's where I first met the band. Scott Ian [ANTHRAX guitarist] approached me a while after that during one of our shows at L'Amour in Brooklyn and asked if I'd be interested in joining them. The band needed to get back in the studio quickly to record a follow-up to 'Fistful Of Metal' and wanted to replace their current singer [Neil Turbin]. The whole thrash metal thing was new to me at the time, so I wasn't really sure at first, but after playing in cover bands for several years, the idea of being able to record an album sounded pretty cool, so I figured what the hell and went for a tryout. After jamming with the band and getting the thumbs up, Scott gave me a cassette with some raw tracks they had been working on and asked me to write lyrics, so that's exactly what I did."

Regarding why he left ANTHRAX prior to the completion of "Spreading The Disease", Fallon said: "Once we had enough material ready, we went directly into the studio to lay down the tracks, and that's where I got to know the band's producer, Jon Zazula. Jon seemed to have a lot of control over the band and was involved in every decision, even those involving songwriting. This was a different situation than I was used to, but I was a cocky kid, so maybe I rubbed someone the wrong way. Who knows? Anyway, it didn't work out, and we parted ways before finishing the album. However, one big mistake I made was not getting copyrights for the songs I wrote, because they wound up using a lot of my lyrics and I never received any credit. In fact, the album simply said, 'All songs written by ANTHRAX' instead of listing the individual writing credits that you would usually see. That was tough to take, especially when you turn on the radio and have to hear someone else singing the words to songs you wrote… and the fact that no one but myself and ANTHRAX knows the truth… but I guess you live and learn."

Fallon was replaced in ANTHRAX by Joey Belladonna, who became associated with the band's most commercially successful era.

In his book "I'm The Man: The Story Of That Guy From Anthrax", Ian stated about ANTHRAX's split with Fallon: "When Matt started [laying down vocals for what became 'Spreading The Disease'], we realized he was green and was in way over his head. When he sang, it was like he suddenly lost his voice. He did a lot of takes and nothing sounded good, so it became pretty clear right away that he wasn't going to last. He had way more attitude than experience, and he had a big mouth.

"While we were in Ithaca [recording 'Spreading The Disease'], we got an offer to open a show for the SCORPIONS in New Jersey, and we were all pumped about it. Then Matt said, 'We can't open for the SCORPIONS.' 'What are you talking about' I said. 'We can't be on the same stage as them. They'll fucking blow us away.'

"That was the last straw. It only took two months for us to tell we weren't happy with this guy anyway, and after that comment, Charlie [Benante, drums], Danny [Spitz, guitar], Frankie [Bello, bass] and I decided to send him packing.

"If you don't have confidence in your own band, you might as well work in a car wash.

"Within hours of that conversation, we pulled a Mustaine on him. We literally went and bought him a bus ticket back to New York, gave it to him and said, 'Sorry, man. This isn't going to work.'"