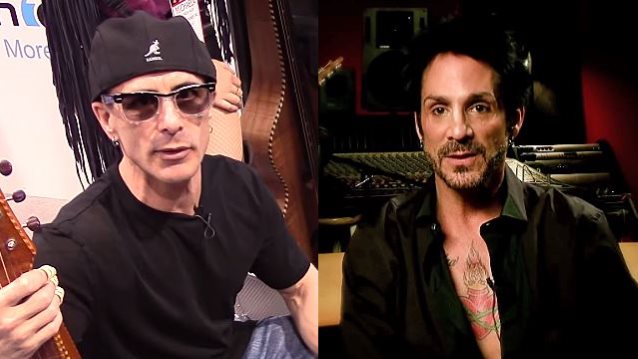 Spitz, a born-again Christian and Messianic Jew who frequently cites his faith as an influential component to his life, said: "Castronovo has arrived to complement my thrash riffs. It just got real, people. All blessings and prayers are welcome for our new ministry and band."

Castronovo, who claims to have given his life to Christ in 1985, added: "[It's] gonna be a powerful statement for Christ! And for music in general!"

Spitz and his ex, Candi, filed for divorce in early 2015 — three months to the day after his arrest in a domestic violence incident.

The now-54-year-old musician was arrested at the couple's then-home in Lake Worth, Florida when Candi's mother called 911 to report he was trying to choke his wife. The charges were eventually dropped, but Candi said she and the rocker were calling it quits after nine years and the birth of autistic twin boys.

Spitz took part in the reunion of ANTHRAX's classic lineup in 2005 and 2006 but left the band after ANTHRAX split with singer Joey Belladonna for the second time.

Back in June 2015, Castronovo was arrested and charged with physically abusing and harassing his now-ex-fiancée, Deidra. Two weeks later, a rape charge was added in his indictment. The charges led to his dismissal from JOURNEY in August 2015, and in October that same year he accepted a plea deal and was sentenced to four years of supervised probation, pleading guilty to two counts of fourth-degree assault, two counts of menacing, one count of coercion and one count of unlawful use of a weapon.

Gonna be a powerful statement for Christ Brother!
And for Music in general! https://t.co/NULyPswpTv