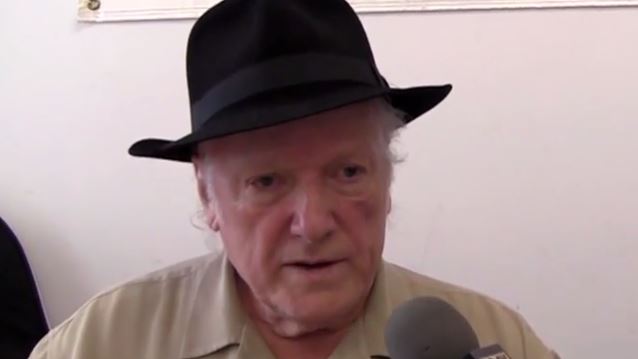 Wagner spent the past two weeks at Scottsdale Healthcare Shea Medical Center in Scottsdale, Arizona, where he had been in intensive care following a cardiac procedure.

The following message was posted on Wagner's official web site:

"It is with a heavy heart and great sorrow we have to let you know that Dick Wagner has left this world.

"Dick had a huge heart, which is perhaps why it gave him so much trouble; it was simply too full of love, of music and life.

"His creativity and passion will live on forever in the legacy he has left for us, in his music and his words.

"We have so much of him to celebrate.

"Dick was prolific not only in the tangible realm of what we can see and hear but in the boundless energy of his spirit, which will never die. He was a fighter, but in the end his body couldn't keep up with his spirit, and so he lays to rest.

"Dick said in 2013, 'Love is in the air. Breathe deep.' Take Dick's advice into your own hearts, and notice all of the beauty in the world, even when it seems cruel and unfair."

Cooper wrote in a statement: "Even though we know it's inevitable, we never expect to suddenly lose close friends and collaborators.

"A lot of my radio success in my solo career had to do with my relationship with Dick Wagner. Not just on stage, but in the studio and writing. Some of my biggest singles were ballads what I wrote with Dick Wagner. Most of 'Welcome To My Nightmare' was written with Dick. There was just a magic in the way we wrote together. He was always able to find exactly the right chord to match perfectly with what I was doing.

"I think that we always think our friends will be around as long as we are, so to hear of Dick's passing comes as a sudden shock and an enormous loss for me, rock 'n' roll and to his family."

Back in 2007, Wagner suffered a serious heart attack but made a full recovery and returned to the stage five years later.

Dick was most notably the guitarist and co-writer of many of Alice Cooper's biggest hits but was also featured on KISS' "Destroyer" and AEROSMITH's "Get Your Wings".

Wagner was Alice Cooper's right-hand man on the albums "Welcome To My Nightmare", "Goes To Hell", "Lace And Whiskey", "From The Inside" and "DaDa", helping in songwriting, composing, production and playing lead guitar. He also contributed to the making of "School's Out", "Billion Dollar Babies", "Muscle Of Love", "Hey Stoopid", and Alice Cooper's latest album, "Welcome 2 My Nightmare".

In January 2012, Wagner released his book, "Not Only Women Bleed: Vignettes From The Heart Of A Rock Musician", as a Kindle edition. It features a foreword by Cooper.