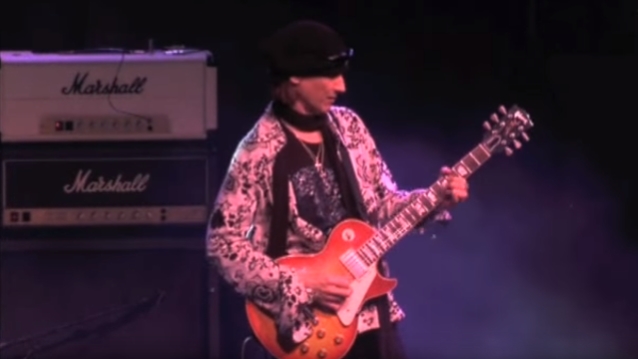 Former AEROSMITH lead guitarist Jimmy Crespo is "doing much better," several days after injuring his head in a fall.

Jimmy, who is best known as the man who replaced Joe Perry in AEROSMITH from 1979 to 1984, is expected to be released from the hospital "soon."

Earlier today, former L.A. GUNS singer Chris Van Dahl, who played with Jimmy in THE JIMMY CRESPO PROJECT, posted an update on his bandmate's condition, writing on Facebook: "Leaving the hospital now where I have been visiting with Jimmy and Cynthia Crespo.

"I'm happy to report (With Jimmy and Cynthia's blessing) that Jimmy has been downgraded from the ICU and is doing much better.

"For those of you who have been asking about what happened? Several days ago, Jimmy slipped and hit his head extremely hard. Up until recently his speech center was affected. Can't tell you how happy I am to report that that certainly wasn’t the case today. We had a wonderful conversation and visited for quite some time.

"On behalf of Jimmy, Cynthia and myself, thank you all for your well wishes, prayers and positive energy!

"Jimmy will be out of the hospital soon enough and back to doing what it is he does best. Playing!"

In addition to appearing on AEROSMITH's "Night In The Ruts" album, Jimmy co-wrote the majority of songs and performed almost all the guitar on "Rock In A Hard Place". He later said that couldn't listen to the latter record for years because "it brought back too many bad memories." He explained to RockMusicStar.com: "Everything ended on a sour note. It took two years to make that record. Steven Tyler was having issues, problems during that period. He was in and out of drug mayhem. He was getting in accidents. Who knows if that was just his way of getting out of doing things or whatever it was? But we couldn't get him locked down and he wouldn't let anyone in the band write any lyrics. It had to be all him during that time. Of course, later on he started accepting other people's songs. But when I was there, he was the 'guy' in charge to decide what AEROSMITH would sound like. And everything revolved on 'When can Steven do it?' 'Can he do it today? No, he's in the hospital.' I mean, it was all this. It was drama. So CBS Records kept picking up the tab. And then they would send us out on tour to help cover the expenses. But just here and there, but not a real tour that would bring in money. So that's how we broke the bank."

Asked how he was informed that AEROSMITH decided to get Joe Perry back in the band, Jimmy said: "Well, let me take it back a year prior to that moment. The last year that I was with them, I was giving the option of staying or leaving because there was no more money, no more touring, CBS wouldn't shell out a dime for the new record because Steven at the time was so non-productive. And because 'Rock In A Hard Place' didn't sell the millions of records that they were use to AEROSMITH selling, after the $1.5 million they spent and didn't recoup, they just put a stop to all money. So there was no money coming in, no touring. So, I had a choice to stay and help get Steven to start writing again or whatever. I stayed for that period, but it became a moot point. He would just not do it. We would make attempts at getting him in the studio and listening to the stuff that I had written and that others had written, but he just wouldn't do it. After nine months of that nonsense, Steven and Joe started talking about getting the original band back together and get some interest back from CBS to support that. I was informed by their manager, David Krebs, that they were going to go with the original lineup. And I said that I think that that's a great idea. I was totally burnt at the time. I know that there was no way that I could make AEROSMITH happen. It wasn't in my power. It would have to be some other miraculous person or the original band. It made sense to me, even though it really sucked for me, because I felt like I failed and I really don't like that. But it was the right thing to do."

Update on Jimmy Crespo.
Leaving the hospital now where I have been visiting with Jimmy and Cynthia Crespo.
I’m happy to...