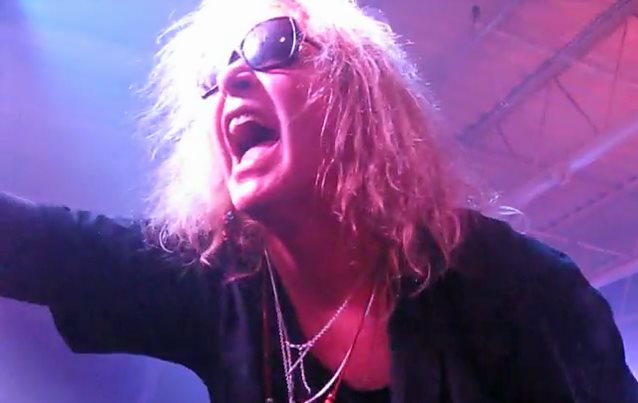 On his initial reaction when he was asked to join ACCEPT:

"Honestly? I was thoroughly annoyed. I mean, it was a six-to-eight-week process of indecision, learning how they work. I was unware that we were gonna do a live show, I think, until about the last week of rehearsal. I, basically, was told that night, 'This is your final audition. If you make it, you're in the band.' They're kind of weird, how they do stuff. I can understand their concerns and caution, but it was almost overkill, you know. To be honest, the next morning, when Gaby [Hoffmann, ACCEPT manager and wife of guitarist Wolf Hoffmann] told me I was in the band, it was, like, 'Okay. Now, can we finally get to work and be a group?' It was just weird."

On the vibe in the studio while ACCEPT was recording the 1989 album "Eat The Heat", his sole effort with the band:

"There was one moment that Dieter [Dierks, 'Eat The Heat' producer] told me about halfway through the record. He stopped [and] put me on pause and he turned his chair around and said, 'You realize that if this record fails, it's your fault and my fault.' [Laughs] And he couldn't have been more correct, you know. We both were blamed for the failure of the record. I didn't get what he was saying, because he was far more experienced than I was. When he turned around and said that, I looked at him, and it kind of pissed me off. Like, 'Why would you say that?' And he said, 'You'll see. If [the album succeeds], we're gonna be gods. If it fails, we're losers.'"

On whose decision it was to change the direction of ACCEPT:

"Well, it's about money, and that's when bands are killed. I think, with 'Balls To The Wall', they were doing about four hundred thousand in the States and worldwide. They couldn't quite crack gold in America. And they said, because of Udo [Dirkschneider, original ACCEPT singer], the voice, obviously, is not a voice that will do a love song and have a pop ballad. So, record companies… everybody kind of leaned on them: 'Hey, we can get rich. We can make it really big with the right singer. We'll cross over. We've got the name, the brand.' Record companies are notorious for destroying bands, and they destroyed it. It was going fine without me, I think, with Udo. I mean, they were making a handsome living, touring the world."

On whether he ever felt he was shortchanged during his time with ACCEPT:

"The only [thing I feel] shortchanged about that whole situation was the way they shit on me in the press to cover themselves. I mean, nobody was happy. I wasn't happy at the end, [and] neither were they. I mean, I slapped Peter [Baltes, bass] in Chicago. It was the wrong decision and I regret it; there's better ways to deal with it. But that goes back to what Dieter said: 'They're gonna blame me and you.' The record sold about a hundred thousand, I think, in the States and then it stopped, so all the record company [people], everybody [started] running to hide and point fingers. They take you out to the big dinners in New York and tell you you're gonna be a superstar, but as soon as the money stops trickling in, they don't know you. That hurts."

On whether he wishes he had been given a second chance:

"I thought I was a better choice than [current ACCEPT singer] Mark Tornillo, if they were really gonna go back out [with someone other than Udo]. I heard there was consideration, in the underground of people close to the band, that my name came up. And, honestly, yeah, I would have seriously considered working again with the guys. I mean, I respect them and I'm more mature, I'm more professional, I'm a better person now. Yeah, I think… Absolutely."

In a 2010 interview with Sleaze Roxx, Wolf Hoffmann stated about the Reece era of ACCEPT, which lasted from February 1988 until August 1989: "The plan was to take things as far as we could. To be honest, the thing was just doomed from the beginning. It was just something that we were so committed to that once we got going, it spiraled and we couldn't pull the plug on it... it was just too late. We were so far into it that there was no turning back. We realized in the process that our personalities and David's personality just didn't mesh, yet we moved forward. I was hoping that the songs would be strong enough to make it work, but they simply weren't there. It was a different time — that was over twenty years ago and things were just so different then."