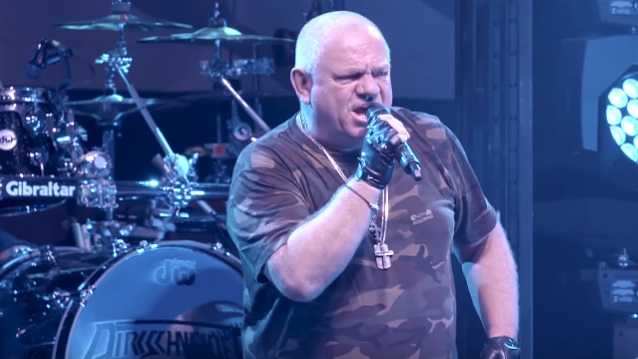 Spark TV, which is part of the Czech monthly magazine Spark, recently conducted an interview with former ACCEPT frontman Udo Dirkschneider and his son Sven, who plays drums in Udo's namesake band DIRKSCHNEIDER and his long-running solo outfit U.D.O. You can watch the entire chat below. A few excerpts follow (transcribed by BLABBERMOUTH.NET).

On how Udo was as a parent:

Sven: "He was on the road a lot, but, of course, [he was] great. We always enjoyed the time when he was at home, which was sometimes not that much. But that's how it goes if you're a musician. You try to spend as much time and intensive time when you have two or three months off, then you try to spend it as well as possible."

On whether rock music was a regular presence in the Dirkschneider household:

Sven: "Absolutely not. It's a normal family life, what we did, or are still doing. When I'm at home, I have my wife and my dog and so there's nothing about rock and roll. As soon as I'm on the road, then we do rock and roll and live rock and roll, but as soon as I'm home, sometimes you really want to keep it away from you as well. I'm not going to concerts or anything. That was the same with my childhood. I had a normal family life. My sister, my mom, my dad, we tried to keep it as normal as possible."

On how Sven was a son:

Udo: "He was, let's say, in a way, quite easy. Yeah, I have nothing really to remember if there was something bad. No, he was quite easy growing up."

On whether Sven always wanted to drum while growing up, or follow in his father's footsteps and become a singer:

Sven: "Actually, I started when I was five, so pretty early. It was clear I was going to be a drummer at some point. There's no way you can compete [with someone like my father] and I don't want to, especially for me, it was clear from the beginning that I wanted to play the drums. I was more into rhythm stuff. I actually dreamed about it, but I never thought that I was going to play together with my dad, especially these songs that we are doing now. When we first played [ACCEPT classic] 'Metal Heart' with U.D.O., it was something very special for me. It was my all-time favorite song from my childhood."

On Sven's favorite drummer as a youngster:

Sven: "Actually, when I was a child, I didn't really think about anybody. But, the first drummer I really met and sat behind his kit was Mikkey Dee [MOTÖRHEAD]. Yeah, also now, he's a big influence on me. I think he's one of the greatest in the business. He was the first drummer I met as a little child. He let me sit behind him during the show and he showed me some stuff, so that was pretty cool. In 2015, I met him again when I played with SAXON two support shows for MOTÖRHEAD. It was pretty amazing because he stepped in for one song, he did '747' with SAXON, so I did the 'high-five' and he went up behind Nigel's [Glockler] kit. That was a great moment."

On whether the two of them discuss each other's mistakes after shows:

Udo: "Of course, we are always talking about when something was happening during the show. We always try to make it better. I think that's important. Not to say, 'Everything is okay. Everything works, and that's it.' No, we are talking about it when we have little mistakes and we want to change it a little bit. I think that's very important, to try to make it better."

On whether Sven will continue to drum in U.D.O.:

Sven: "I hope so. Of course. Definitely, of course."

On why DIRKSCHNEIDER will no longer continue once this current run of touring concludes:

Udo: "Some people came up with this idea, you know, 'Why aren't you going to continue under DIRKSCHNEIDER?' No, we are working on the 16th U.D.O. album. We have a big following also with U.D.O. It may make the people confused. DIRKSCHNEIDER continued for nearly two years for ACCEPT songs, blah, blah, blah. I can't imagine coming up with an album called DIRKSCHNEIDER. People would get confused. We discussed this already and then we said 'We'll definitely continue under U.D.O.'"

Udo and Sven Dirkschneider spent the last year and a half touring under the DIRKSCHNEIDER banner, performing classic ACCEPT songs for the last time. The trek, which was originally supposed to conclude with the band's North American run in January/February, has now been extended through early 2018.