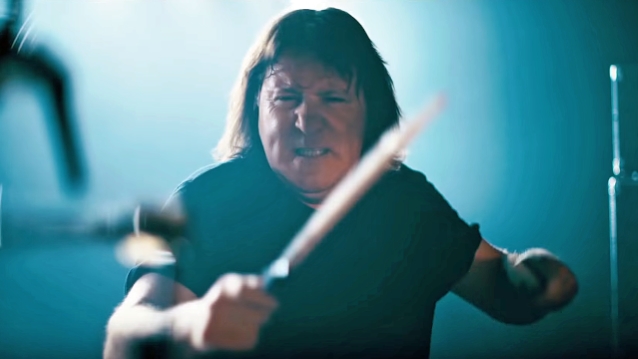 Simon Wright says that the world has been "righted again" now that AC/DC is apparently once again making music with singer Brian Johnson and drummer Phil Rudd.

Johnson and Rudd, along with guitarists Angus Young and Stevie Young, were photographed outside Vancouver's Warehouse Studios in August. Based on the pictures, the assumption is that AC/DC is in the midst of making — or at least planning — another album, with Rudd and Johnson both back in the lineup. Online reports have also indicated Angus Young will dedicate the new AC/DC album to his late brother.

Speaking to "The Blairing Out With Eric Blair Show" at the fourth annual "Bowl For Ronnie" celebrity bowling party on October 25 in Studio City, California, Wright, who played drums for AC/DC in the 1980s, weighed in on the current happenings in the AC/DC camp. He said (see video below): "Well, I'm not close anymore, but I thought when Axl came in, I thought he did an amazing job. It's really difficult to fill somebody's shoes like Brian, but he came in there, and I thought he did a great job. And I'm assuming he saved the tour, 'cause it's hard to carry on with no singer. So I think he did a really good job. As far as what's happening is now, I know as much as you [do] — I read it on the Internet and stuff — but if what they're saying is happening, I think it's fantastic. I think the world is righted again — they're together making music, and that's awesome."

Asked what AC/DC's work ethic was like when he was in the band, Wright said: "It was kind of relaxed. But, obviously, when we went on stage, it wasn't — it was just full-on exhaustion, two hours a night. Yeah, that part of it was really intense. But rehearsals were kind of laid back. They knew exactly what they were doing; I wasn't sure, but I did what I did, so… [Laughs]"

The drummer went on to say that he is still a huge fan of AC/DC. "Oh, yeah, they're fantastic," he said. "Best rock and roll band in the world."

Wright, currently of DIO DISCIPLES and also known for his work in DIO, RHINO BUCKET and UFO, landed the AC/DC drum spot in 1983 in place of Rudd. Wright, a then-unknown drummer whose first credits included Manchester, England metal outfit A II Z, joined AC/DC in time for the touring cycle for "Flick Of The Switch" and played with the Australian rockers throughout the '80s before leaving to join DIO in 1989.