FOREIGNER's previously announced summer 2020 North American headlining tour has officially been canceled due to the coronavirus pandemic which is sweeping the globe. The "Juke Box Heroes 2020" trek with KANSAS and EUROPE was scheduled to launch on July 9 in Albuquerque, New Mexico and conclude on September 13 in Austin, Texas.

FOREIGNER guitarist Mick Jones said in a statement: "We were very much looking forward to seeing you all at what promised to be a memorable evening of classic rock hits with KANSAS and EUROPE this summer. We are grateful that so many of you had purchased tickets and we were looking forward to the tour as much as you were.

"We will get through this together and can't wait to see you all again as soon as safely possible.

"If you have tickets for our Red Rocks show on July 22, please note that this date has been moved to July 22, 2021 as a FOREIGNER performance with a full orchestra. All tickets for this year's show will be honored. We will be announcing the rest of our plans for 2021 shortly, and we hope to see you then!"

All ticket holders will be e-mailed directly with their refund options if their show is no longer happening or if they purchased tickets to the Red Rocks date and cannot attend or would prefer a refund. Visit livenation.com/refund for more information.

Last year, FOREIGNER bassist Jeff Pilson confirmed that there are no plans for the band to make a new studio album anytime soon. "We have had new songs on various packages that we put out — we had two new songs out just a couple of years ago, on our 40th anniversary," he told the Rock 100.5 radio station. "But we haven't had a whole new record of new material in 10 years. And honestly, I'm not sure if there's gonna be a whole new record of new material again. It kind of doesn't work that way anymore. It's kind of more a singles world. And it's pretty hard for us to pull up stakes and stop and record a whole record now, because we are a touring machine. But I think what you will continue to see from us is new songs and packages over the next few years."

To all our friends, Foreigner is disappointed to share the inevitable news that our Juke Box Heroes 2020 tour will no longer be taking place. @TheMickJones had this to say: pic.twitter.com/Upj3optjVW 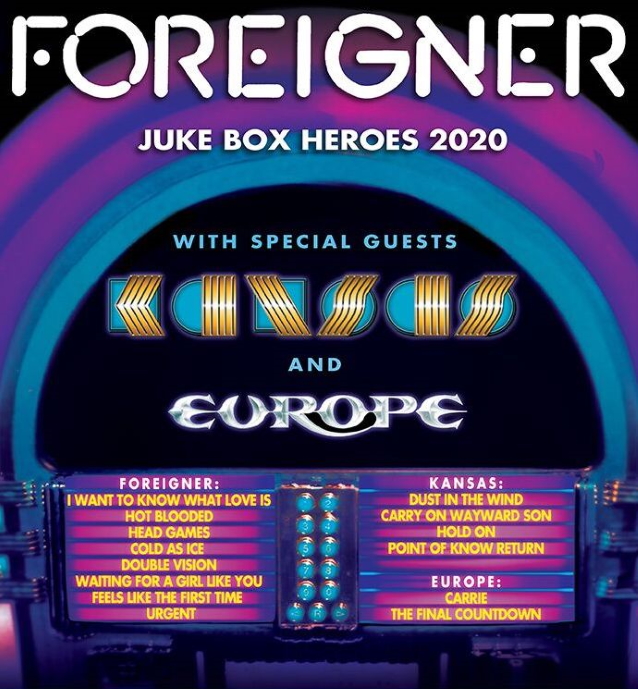