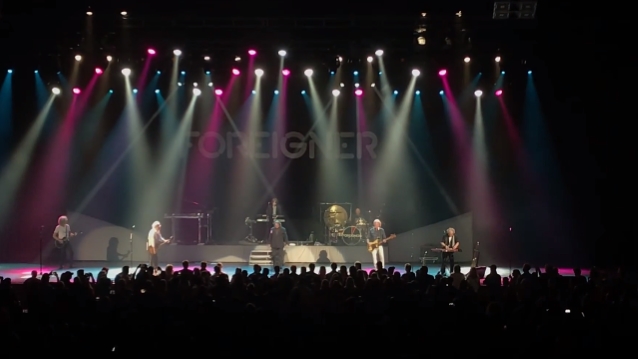 Legendary rockers FOREIGNER played the first of four "Double Vision: Then And Now" concerts Friday night (November 9) at Los Angeles's Microsoft Theater. The show, which marked the 40th anniversary of FOREIGNER's second album, "Double Vision", featured all current bandmembers plus the original musicians who helped to put the iconic group on the map more than forty years ago. Singer Lou Gramm, drummer Dennis Elliott, keyboardist Al Greenwood, guitarist/saxophonist Ian McDonald and bassist Rick Wills joined Mick Jones and FOREIGNER to rock through some of the best-selling songs from the band's albums.

Current and classic members performing together:

Asked by USA Today why he chose to commemorate "Double Vision" with these reunion shows, Mick said: "Well, to celebrate the 40th anniversary of the band's foundation, I wanted to do something special and a little unexpected. We did a couple of shows earlier in the year together and everybody hit it off so well. My two lead singers, Lou Gramm and [current frontman] Kelly Hansen, really hit it off like a house on fire, and the rest of the guys were happy to be a part of it. It was very emotional. It brought up a lot of stuff from the past, but it just felt natural and we fell right back into it."

Gramm said that it wasn't hard to get all the guys back together. "Everybody was actually pretty boned up on their instruments, and with a little bit of practice, it was sounding good," he said. "Everyone was anxious within reason. We didn't want to make more of it than what it was, but it ends up being a lot of fun."

Gramm and Jones's June 2013 performance of "I Want To Know What Love Is" and "Juke Box Hero" at the Songwriters Hall Of Fame in New York City marked the first time the pair performed together in a decade after Gramm left FOREIGNER for a second time. Hansen has fronted the group since 2005. Jones is the sole remaining founding member in FOREIGNER's current lineup.