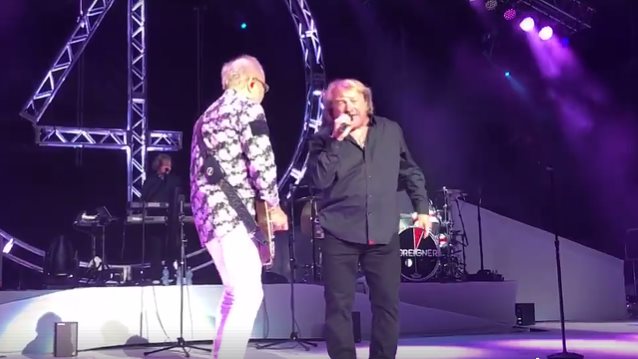 Four of the five surviving original members of FOREIGNER reunited for a three-song encore during the band's concert last night (Thursday, July 20) at the Nikon at Jones Beach Theatre in Wantagh, New York. Singer Lou Gramm, keyboardist Al Greenwood and multi-instrumentalist Ian McDonald joined Mick Jones to perform "Long, Long Way From Home", "I Want To Know What Love Is" and "Hot Blooded". This marked the first time Jones, Gramm, Greenwood and McDonald had all shared a stage together since 1980.

Said Mick Jones: "It was great to have Lou, Al and Ian join us on stage last night, and certainly brought back some special memories. All the original guys are out there playing live shows and working on studio projects. A performance by the entire original band for a Rock And Roll Hall Of Fame induction next year would be a great way to cap off our fortieth-anniversary celebrations."

Video footage of last night's concert can be seen below.

During an appearance on the "Trunk Nation" show on SiriusXM channel Volume (106), Gramm stated about the prospect of playing with his former bandmates again: "Mick and I have talked about it at length. I think there's a number of the original bandmembers that still play their instruments, and I think that if I make an appearance, it will be with the rest of the band, the original band. And we'll do half a dozen songs and then maybe do some things with his band."

Although Gramm said that he would be open to doing "a song or two" with only the current FOREIGNER lineup, he added that he "would feel a lot better with the original members around me. I just would think it's appropriate, given what we're celebrating."

Gramm, who learned two decades ago that he had what he called an "egg-sized tumor with tentacle-like appendages" in his frontal lobe, said that his health was "very good" at the moment "considering what I went through back in 1997." He explained: "I take care of myself explicitly. I've let go of all the alcohol and the drugs and that kind of life. And the life I'm leading now is probably what I should have been doing for all those years too. But I'm doing it now. And all my numbers are good, thank God. And after something like that, you can live a good, healthy life, but you have to really be serious about maintenance."

FOREIGNER's 40th-anniversary tour — with support from CHEAP TRICK and JASON BONHAM'S LED ZEPPELIN EXPERIENCE — kicked off July 11 in Syracuse and runs through through September 9 in Auburn, Washington.

So this just happened #Foreigner40